Share All sharing options for: "15 For 15" - The 8th Greatest Player in USF Football History Is... 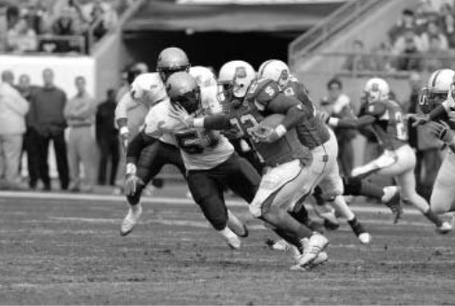 Stephen Nicholas might have been the first player in school history who USF fans identified from a long way away as someone who would be playing in the NFL. When he arrived in Tampa in 2002 from Jacksonville's Lee High School, he immediately found himself on the field until an ankle injury against Arkansas ended his season. After getting a medical redshirt year, he returned to the lineup and 2003 and never left it. He ended up starting 45 games and playing in 51, both second all-time, and he currently ranks third on USF's career tackles list (326). Surprisingly he's second in sacks as well, with 20.

Among his many honors are the team's defensive MVP in 2004, two team defensive playmaker of the year awards, plus a third-team Freshman All-American and a spot on the All-Conference USA Freshman first team in 2003. Nicholas was second-team All-Big East in 2005, and with a lot of people thinking he might leave early for the NFL Draft, he made everyone happy and came back for his senior year. In 2006, he was first-team All-Big East and again earned the team's defensive MVP award.

Stephen was a quick and formidable tackler, and although he was an outside linebacker during his career, he could play any linebacker position (and sometimes did). He probably didn't get as much due as he should have because the team as a whole was still fairly unknown. The team "struggled", relatively speaking, during his first three years, and didn't get their first taste of national buzz until he was just about ready to graduate. It was unfortunate timing for Nicholas - a year later and he's a superstar as part of that 2007 defense. But that's why we have this list.

Nicholas was drafted by the Atlanta Falcons in the fourth round of the 2007 NFL Draft, and last season he took over a starting outside linebacker job, a spot he still holds going into the 2010 season.