With the USF Sun Dome undergoing renovation, our intrepid basketball reporter will follow the South Florida basketball team around the USF campus this season, as the team plays its games in different buildings across the campus. Check back after each home game for updates.

infield infidel is on holiday, but our Campus Nomads correspondent has the story. 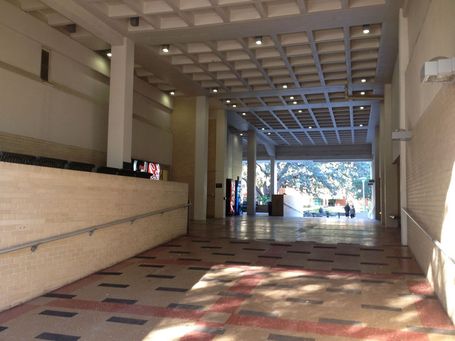 TAMPA -- Anthony Collins converted a three-point play with 12.7 seconds remaining to lift the South Florida Bulls to a 67-65 win over the Rutgers Scarlet Knights on Sunday afternoon in the Cooper Hall breezeway.

The visiting team, off an emotional, double-overtime upset win over #10 Florida on Thursday night, had trouble with the quick turnaround and the early start on New Year's Day. Adding to their misery, the Subway around the corner was closed, forcing them to scavenge nearby vending machines for their pregame meal.

"I know it affected me," said junior swingman Dane Miller, who only scored three points. "I really needed a $5 footlong to get ready to play, but it just wasn't going to happen." He then said he and his teammates scrambled to get whatever they could from the balky machines around the opposite corner.

Miller added, "First the machine eats my dollar, and then after I get some change... a stale pimento and cheese sandwich? Man, get that (expletive) out of here."

Ron Anderson Jr. led the Bulls with 15 points on 7-for-8 shooting. Longtime Cooper Hall residents could be heard noting that they had not seen such athleticism in the breezeway since the epic hacky sack games of the mid to late 1990s.

With the Bulls trailing 65-64 late in the second half, Collins dashed from one end of the breezeway to the other, getting a vicious screen set by the brick wall in the middle of the ramp. He scored and got fouled, although Rutgers coach Mike Rice tried to argue that Collins actually made contact with a skateboarder coming from the CIS building in the opposite direction.

"It was so obvious. You look at the tape and you see some kid in cargo pants not looking where he's going and he sideswipes their guy, and we get the foul. I don't know what to tell you."

Rice then cut his press conference short when a reporter suddenly asked about the coach's uncanny resemblance to Bat Boy when he gets upset during games.

The Bulls will travel to Villanova and Notre Dame as Big East play continues. Their next home game will be January 13 against Seton Hall at an as-yet-undetermined location.