(NOTE FROM JAMIE: Today's guest Mixologist is Timothy Burke, also known as @bubbaprog. Tim is an editor for Deadspin and runs the invaluable Mocksession and GIFulmination Web sites, which keep us all fully stocked with animated sports GIFs, screen shots, and videos. He is an alumnus of both Ohio University and USF.) 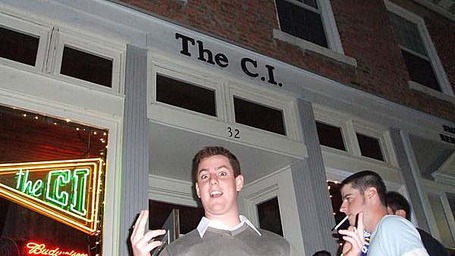 The CI is just one of 20-some bars along the three blocks of Court Street in uptown Athens, Oh., a brick-paved boulevard known as much for being home to impromptu protest gatherings as it is for fueling activities that have earned Ohio the title of America's Biggest Party School. The CI was also "my" bar during my tenure as an undergrad (thanks to knowing the guy at the door checking IDs) and a place I'd like to have been for Ohio's win over Akron in the MAC Tournament or, especially, Friday night's upset NCAA Tournament win over Michigan.

The CI's merits are simple: there's no icky dance floor, just a narrow corridor with a basement bar downstairs and some pool tables. No dance music on the jukebox, either, and Labatt on tap poured cheaply and liberally into plastic "Get High At The CI" take-home cups. Inclusive, but not weird; diverse, but all patrons sharing something in common. It's like if you took the bar side of L.A. Hangout circa 2006 and put The Hub (also circa 2006) in the basement.

The CI does have its issues, however, mostly insofar as its popularity and under-staffing means getting drunk on a Wednesday or weekend evening requires some pre-gaming--especially when you consider the very social nature of the place means you spend more time talking than drinking. So today's Mixology comes from the bar across Court Street from The CI: the late Junction (R.I.P.), whose Junction Punch gave any night a kick-start and allowed Bobcats like me to obey the time-tested rule of liquor before beer. The recipe is a long-held secret, but I've talked to some former bartenders there and this is an approximation.

Get a large glass, preferably plastic because if you drink more than one Junction Punch you will inevitably drop the glass at some point. Into the glass pour:

- 1 oz light rum
- 1 oz vodka
- 1 oz gin
- 1 oz wildberry schnapps (The Junction used DeKuyper Mixed Berry Medley)
- Splash of sour mix
- Splash of grenadine
- Splash of 7up (the Junction pros insist that you must use Sprite, but I prefer 7up)

Stir gently. Do not shake! Drink as quickly as possible, because you never know when Ohio liquor control agents may raid your establishment.