About That Lauren Chamberlain Home Run

Share All sharing options for: About That Lauren Chamberlain Home Run

So yesterday Lauren Chamberlain hit a home run off Sara Nevins (who is still a boss, despite that) to turn the Women's College World Series game between USF and Oklahoma around. Chamberlain's 28th home run of the year, a two-run shot, gave the Sooners a 2-1 lead in the bottom of the fourth inning, and they went on to win 5-1.

What no one talked about was how hard she had to hit that ball to get it out of the stadium. ASA Hall of Fame Stadium faces northeast, and the wind was blowing in from the north at about 25 miles an hour during the game. Chamberlain drilled a line drive to straightaway center, where the fence is 220 feet away from home plate according to this link, and it carried a few feet over the wall. It was a hell of a shot.

This overhead shot is from 2009, before the fences were moved back, but here's approximately where the ball landed. 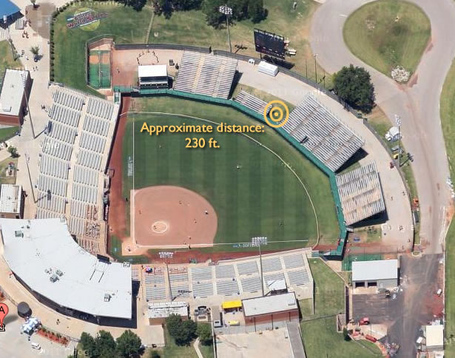 And that was basically into a 25 mile an hour wind. What if the wind hadn't been a factor? We put our Voodoo Five mathematicians back to work to figure out what would have happened. It wasn't pretty. 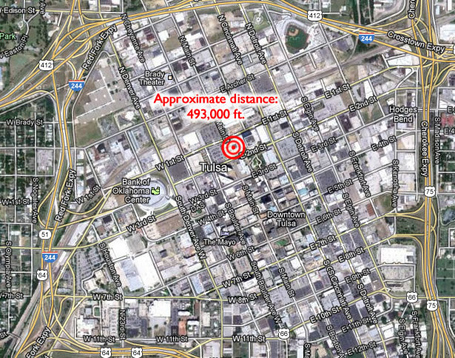 Don't let it bother you, Sara, it happens to everyone sooner or later. Remember the time Mark McGwire hit a home run off Randy Johnson in the Kingdome that landed somewhere in Alaska? And he still won 300 games. Even threw a perfect game like you did. Tomorrow's another day. Go get 'em, boss.