There have been times during all this conference realignment drama that plenty of people have said to themselves, "I just wish everything could go back to the way it was." So that's what this scenario does. What if no one had switched conferences at all in the last 10 years? What would happen then?

The Big 10 still has 11 teams. The Big XII still has 12, and so does the SEC. There's only a PAC-10, not a PAC-12. The ACC has nine teams and John Swofford's mad dickishness has been kept in check. The WAC is still a functional football conference. And USF is entering its 10th reasonably happy season in Conference USA, along with Louisville, Cincinnati, TCU, and all the riffraff like Memphis, East Carolina, and Southern Miss. Sure, the league doesn't have an automatic BCS bid, but most years they have a team worth discussing for an at-large bid. It's not terrible.

There's some kind of bug in the game that sometimes locks conference games that are no longer conference games, so you can't get rid of it when you customize your schedule. That glitch made me keep the Rutgers game on the schedule, so in order to make USF's 2012 schedule work, I had to drop the games against Miami and Chattanooga.

Could USF win this league? They'd have a good sporting chance, but it didn't happen in this sim. 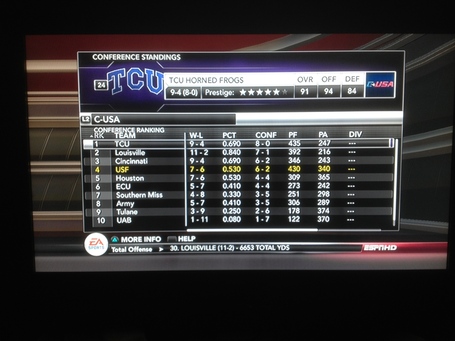 And the reason it didn't happen (other than TCU going unbeaten in conference play, obviously) is that after a 4-0 start in conference play, B.J. Daniels got hurt against East Carolina and missed the rest of the regular season. USF lost to the Pirates, had to grind out a win against a terrible UAB team, then got walloped by Cincinnati and slipped into fourth place.

More on this retro bizarro season after the jump.

The Bulls went 6-2 in conference and 7-5 overall, and were invited to... grrrrrr... the Beef 'O' Brady's Bowl to face... interesting... West Virginia! Unfortunately, the Mountaineers rallied from an 28-10 halftime deficit and eked out a 36-35 win, even though USF outgained them by over 150 yards. Daniels returned for the bowl, but his three turnovers (a pick and two fumbles) proved costly.

Here's the rest of the schedule: 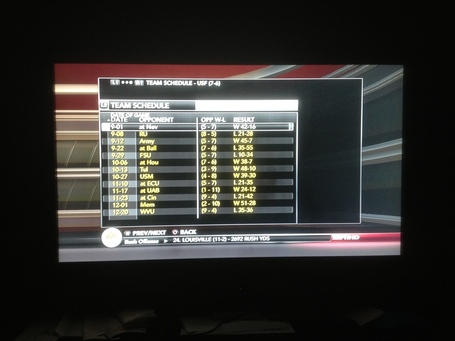 What the hell does this game love so much about Ball State? 55 points? Fifty-five goddamn points??

Let's look at the stats. Daniels was actually having a strong season before he got hurt. He only finished 30 yards behind Demetris Murray as the team's leading rusher, and added six TDs on the ground. 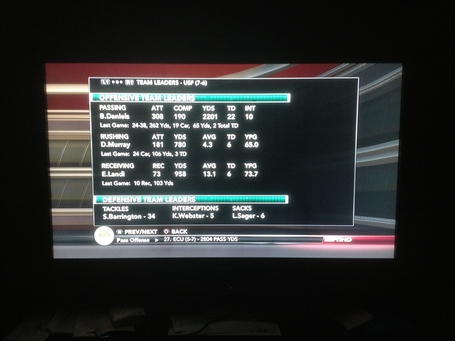 Daniels completed over 60% of his passes in this sim, and was having a really good season before he got hurt. Once again the offense leaned on Evan Landi a lot more than they would in real life, and I'd be pretty surprised if Luke Sager led the team in sacks this year. But Sterling Griffin and Andre Davis put up strong numbers, and the Bulls had six defenders with double-digit tackles for loss. 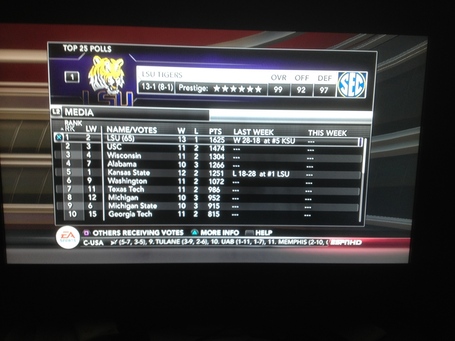 LSU overcame a September loss to Auburn and went 13-1, winning the SEC championship and knocking off Kansas State (there's another team this sim absolutely adores) in the title game. The top 10 was pretty balanced, although Texas Tech finishing #7 was pretty funny. Conference USA earned an at-large BCS bid for its champion, and finished with two ranked teams -- #21 Louisville and #23 TCU.

Here were the other BCS games: