Yesterday we pretended like the last few rounds of conference realignment never happened. Today, let's fast-forward and get it all done and see what happens. That means Syracuse and Pittsburgh are gone to the ACC, while Boise State, Houston, Memphis, SMU, UCF, and San Diego State all move into the Big East. Conference USA and the Mountain West soldier on by depleting the Sun Belt and the WAC, driving the latter almost out of business. (It would have been completely out of business like it will be in real life, but the game doesn't let you have a conference with less than four teams in it.)

It's impossible to line up the new 12-team Big East geographically, so I went with a version of the "zipper" alignment that's been talked about recently. Each division has one Western team, one Texas team, one Midwest-ish team, one Florida team, one northeast team, and one Cincinnati or Temple. Then I set up protected cross-division games for regional or traditional rivals, like Boise-SDSU, Cincinnati-Louisville, SMU-Houston, and USF-UCF. Here's how it turned out:

Could USF win this conference, or even their division? Not in this sim, although it wasn't for lack of scoring points. But look who did win the division: 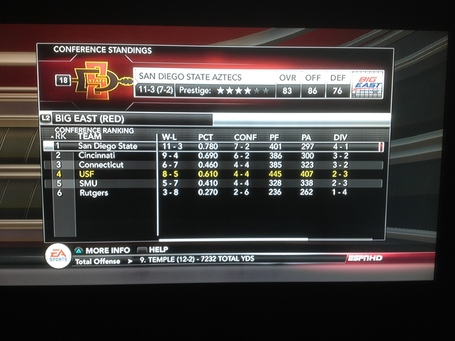 San Diego State. Really. And that's not even the biggest surprise in the conference. Wait until you see who won the Blue Division and wound up with the Big East's BCS bid.

USF was the highest-scoring team in the Big East, but they also gave up the most points and only went 7-5. They then hammered TCU in the New Mexico Bowl (all the bowl tie-ins went haywire) to finish up at 8-5. Honestly, once you see the way the season went, you probably wouldn't object too much to a year like this one.

More after the jump.

Let's get right to the other division. This is arguably more ridiculous than the sim where Arkansas State played for the national title. 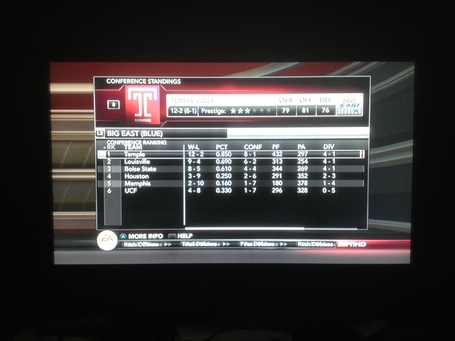 Meet your bizarro 2012 Big East champs... freaking Temple??? Yes, the Fighting Addazios dove their way to an 11-1 regular season, then beat the Aztecs in the conference title game and advanced to the Fiesta Bowl.

The game-by-game for USF: 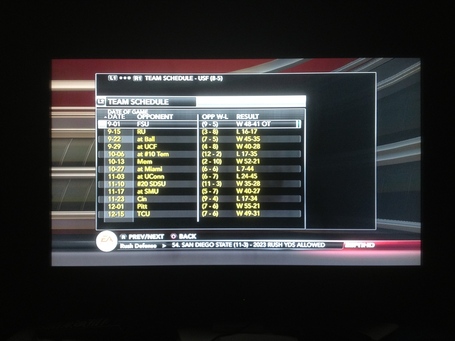 Most every game was exciting in its own way, starting with a ridiculous overtime win over Florida State. Seven games scoring at least 40 points, and seven games giving up at least 30. Blowouts of Pittsburgh (who I couldn't erase from the schedule) and Memphis (who trailed USF 52-0 after three quarters). A 44-7 drubbing by Miami. An inexplicable loss to 3-8 Rutgers by one point at home. Giving up 45 points to UConn, of all teams. Handing San Diego State its only regular-season loss.

Here are the stats. These are not misprints. 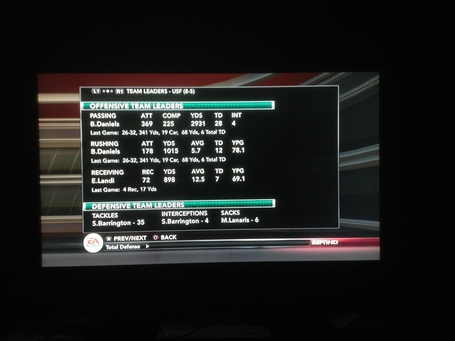 B.J. Daniels completed 60% of his passes, combined for almost 4000 yards of total offense and 40 touchdowns, and only had five turnovers all year. If he had a year like that in real life, it would easily be the best single-season performance in school history. And yet he didn't even crack the top 12 in the Davey O'Brien award voting. The fix was clearly in.

Demetris Murray and Michael Pierre split the rest of the carries, while Evan Landi (again), Sterling Griffin, and Andre Davis all had at least 50 catches and 700 receiving yards. USF was ninth in the country in scoring average and 13th in total offense. But they were dead last in yards allowed and only forced 15 turnovers in 13 games.

Finally, the rest of the country. We know Temple got a BCS bid. But who won the big prize? 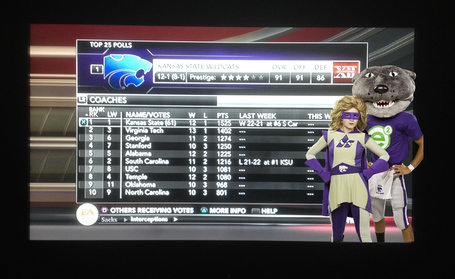 ECOKAT NATIONAL TITLE. This is the fourth sim I've done in this series, and it's the fourth time K-State has reached the BCS. They finally won it all this time, and they did it in typical Bill Snyder "how the hell did they win that game" style, rallying from 11 points down and edging South Carolina on a last-second field goal. (Curiously, their only loss was at home against 3-9 Kansas.) Virginia Tech finished #2 and had a national title case of their own, except that John Swofford decided to take Pittsburgh and Syracuse and they probably dragged down the Hokies' strength of schedule, ha ha ha suck it.

The other BCS bowl games:

- Rose: USC 41, Northwestern(!!!!) 13. The Wildcats upset Wisconsin in the B1G title game, then fell apart in the fourth quarter against the Trojans and finished unranked.
- Orange: Virginia Tech 26, Wisconsin 17
- Fiesta: Stanford 35, Temple 19
- Sugar: Georgia 17, North Carolina 10 (apparently there is no bowl ineligibility in this game)