People describe the USF quarterback as an electric player. But maybe they mean that another way?

A couple of years ago, when I went back to Florida for the USF-Florida game and was having a hard time finding a place to blog about the game in Gainesville, I could only get online long enough to sum up the whole game with a tweet. 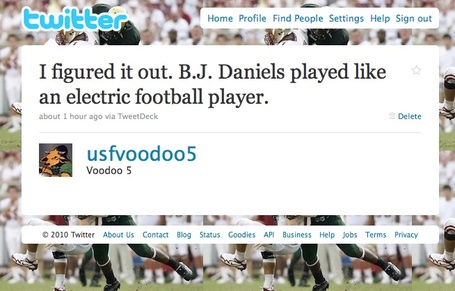 That was a throwaway joke back then, but it came back watching last night's game. Electric football players run pretty well. They scramble and zigzag around the field and eventually break through for good yardage. But have you ever tried using one of those Triple Threat Quarterbacks in an electric football game? You set the ball in their "arm", which is really a little spring-loaded lever, and then you flick the lever to have him throw the ball. Unless you're really good, that pass can go literally anywhere. You can throw the ball off the end of the table just as easily as you can throw it to your receiver, and you only have to hit him on the fly anywhere on his body or his base. It's completely unpredictable. Just like B.J. Daniels when he throws the ball. 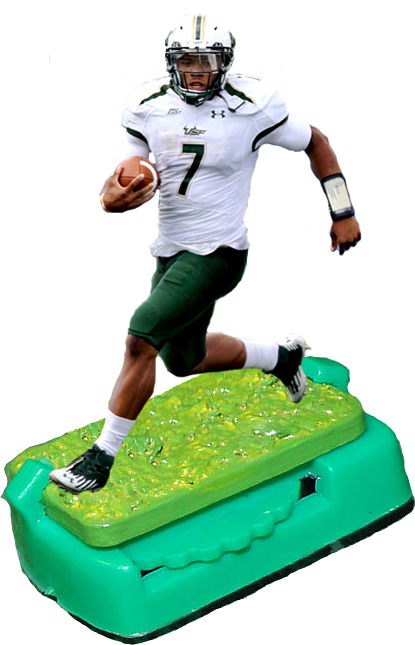 People give Todd Fitch a lot of grief when the offense doesn't produce, and sometimes he earns it. But when your quarterback can't throw a short pass on target consistently, does it really matter what play gets called? I can think of one play that USF ran at least twice that should be an easy, easy play. The first one was on 3rd and 4 at the FSU 39, on the Bulls' second possession. Daniels rolled out to the right, and Terrence Mitchell ran a quick out. It's a takeoff of the classic Sprint Right Option play, except out of the shotgun. Mitchell was open for an easy first down. But Daniels threw it at his feet for an incompletion and USF punted. (Questionable decision to punt, but let's not go there right now.)

The second time they called it was the first play of the second quarter. 2nd and 9 at the FSU 49. Exact same play, exact same receiver. Mitchell was open again. But Daniels threw another bad ball. Somehow Mitchell stuck out his left hand and the ball stuck to it, so they gained seven yards on that one. Still, another bad pass at close range. And there were a few others, not to mention the passes where Daniels maybe should have thrown the ball sooner, but held on and then had to get rid of it to avoid a sack. (Which included USF's last snap of the game, when he threw it out of bounds on 4th and 6.)

It was my #1 point in the Five Keys post yesterday -- accuracy on short passes. The USF game plan wasn't bad at all. There were lots of short passes, knowing FSU would sit back in a zone to take away all the deep throws. Daniels had to hit more of them than he did. That certainly wasn't the only reason the Bulls lost the game. (At this point, I'd like a little less realtalk out of Rick Smith and a little more of, well, anything out of his players in the secondary.) But the erratic passes, even the short ones, aren't going away. At this point, as a senior and a four-year starter, I think B.J. just is what he is, and even though he's playing his heart out, we'll have to deal with the fact that we can't be sure which quarterback is going to show up to the game we're watching.