(Yeah, we know this is well after Christmas. We thought about waiting until January 6 to post the last part, as if someone would have an epiphany, but... no, that's not happening.)

The Ghost of USF Christmas Present has departed, but there's no one else coming this night. Doug spends an uneasy Christmas Day waiting for the last ghost to appear, and goes back to work the next day, still waiting for the ghost he knows will appear eventually.

Then right before lunch, the lights in his office dim, and it appears right in front of his desk. It is obviously the Ghost of USF Christmas Future, but it looks like Rocky in a cloak. 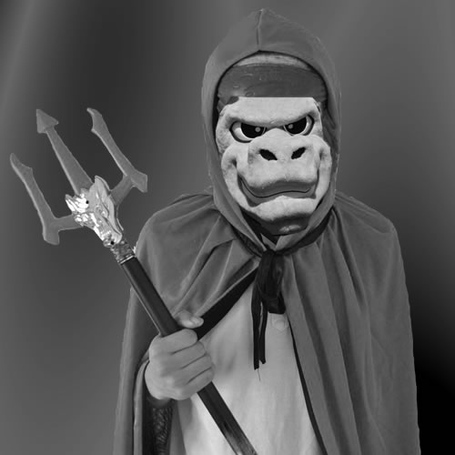 WOOLARD: Are you... the Ghost of USF Christmas Future?

WOOLARD: Do I have to come with you?

Rocky extends his hand across the desk. Doug takes it and they are transported to a sad-looking homecoming parade on campus. There is nowhere near the crowd or the enthusiasm there used to be.

WOOLARD: Where is everyone? Isn't it homecoming?

Parade floats go by. One says "TAME THE TIGERS."

WOOLARD: Oh, homecoming is against Clemson? Fantastic! That means we ended up in the ACC, doesn't it? That doesn't sound so bad. Why aren't people excited about that?

Another float goes by that says "BEAT MEMPHIS."

Rocky shakes his head no.

Rocky shakes no again. They travel to a number of phone calls, board meetings, and press conferences. Slowly, it is all revealed. First, San Diego State and Boise State decided not to join the conference. Then the Mountain West stole SMU and Houston. UConn and Cincinnati made it into the ACC. The Big XII never added anybody. USF was the only school from a former BCS league to get completely left behind as everyone else cashed in on the new era of college athletics. They were lucky that none of the other new schools could go back where they came from, or things could have turned out even worse. Like falling all the way back to the Sun Belt or something.

They next go to the homecoming game, which is very poorly attended. 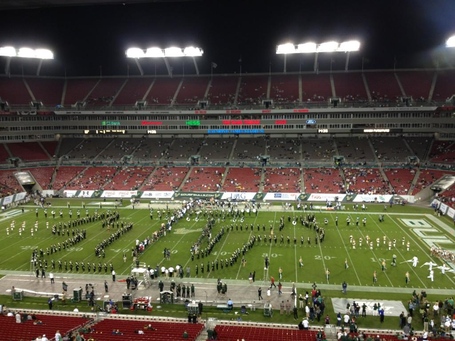 They can hear a couple of disappointed alums talking.

ALUM #1: Man, this is depressing. Remember when homecoming was against Louisville and Cincinnati and Syracuse and people showed up? I know that wasn't like playing the Gators or something, but it was a lot better than this.

ALUM #2: I don't even know why we bother now. And Boise wins that one spot in the big bowls every year. We can't win anything that anyone cares about. We should just play in the FCS. At least then maybe we could win a championship.

ALUM #2: And then it all went way downhill.

ALUM #1: A bunch of coaches we never heard of... who all leave as soon as they win just a little bit...

ALUM #1: Can't even get a big school to play here... all the good recruits leave town...

ALUM #1: And that press conference where Judy and Doug retired together, and went off arm in arm into the sunset as if everything had been great and USF had a bright sports future. No accountability at all.

ALUM #1: At least some students showed up to boo them. That was fun.

ALUM #2: I don't want to be here, thinking about all this. Let's go watch some other game on TV.

Rocky puts his head in his hands as the two alums leave the game... in the second quarter.

Then the two of them go to the new athletics CFO's office. He has a pile of pink papers in his hand as he's on the phone with someone.

CFO: We can't afford to do anything! We can't invest in anything, we can't improve anything, we can't promote anything, we can't pay anyone what they're worth... haha, yeah, I guess that part hasn't changed, has it?... Well, there's no revenue! The TV money is pathetic! No one wants to buy tickets to watch us play Memphis forever... yeah, all our income goes to paying debt... more payday games? I mean, I guess if that's what it takes... no, the students stopped giving us a blank check... yeah, I suggested dropping down to FCS, but no one was interested in hearing that... no, I don't know what happens if we default on the facilities. They can't lock us out of them, can they?... no, I don't know how to fix this... we're stuck in this as far as I can see... I know, this sucks...

WOOLARD: No, this is terrible! This is my legacy? Crushing the entire department and all the fans and giving them no chance to recover and acting like everything was fine? That's how I'll be remembered?

WOOLARD: I know things aren't fine! But what do I do?

Rocky is gone. Doug is back in his office, sitting behind his desk. Everyone continues around him as if he had never left. He has absolutely no idea what to do, or if there's even still time to do anything. The Fear has set in.