We do this every year, and this year everyone in New York has something to look forward to except us.

For the most part, we try to limit our use memes on this site to one week per year. This is that week.

We've done memes when USF had something to play for in New York (2010, 2012) and when they had absolutely nothing to play for (2011). This year falls in the latter category. Either the Bulls win five games in five days, after only winning three during the entire conference season, or they go home. On top of that, this is the final Big East tournament for USF and a lot of other teams. But with UConn sitting out this week, everyone else in MSG has a new league to look forward to, or at least a trip to the NCAA Tournament waiting for them if you're Cincinnati. And then there's us, with no immediate future and no long-term future on the horizon.

All of this leaves us Bulls fans feeling a little ornery. Because while we've always said the conference tournament is about two things:

we also believe the conference tournament is a celebration of the league and its teams and the way it plays its sport. Instead, USF is going to a party where they have nothing to celebrate. They might even be the first team cast out of the tournament, if they can't beat Seton Hall.

Well, let's see if they're still laughing when PTSD Clarinet Boy gets after them! 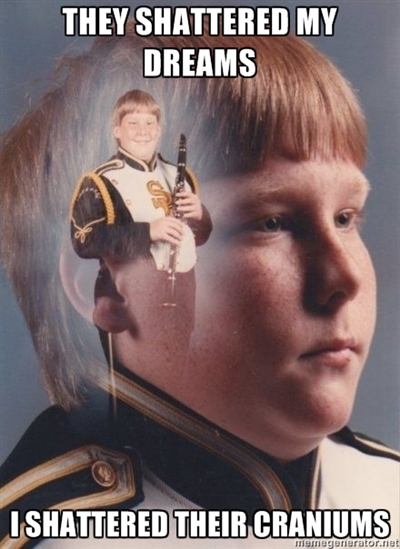 Tomorrow you'll get a USF-Seton Hall preview, a GameThread at 7:00pm, and hopefully we'll do it all again on Wednesday for Syracuse. See you then.