The Plays That Killed Us Against Miami... And Why USF Must Keep Calling Them

In the mistakes were signs of progress.

Share All sharing options for: The Plays That Killed Us Against Miami... And Why USF Must Keep Calling Them

So far this season, the talk about the struggling USF offense has mostly been about the quarterback position. Matt Floyd won the job in the offseason, was sub-Courtney Denson terrible against McNeese State, and was replaced with Bobby Eveld and later Steven Bench. The Miami game was Bench's first start, and the first game of the Willie Taggart era that saw one quarterback take all the snaps.

And for one drive, abysmal USF matched mighty Miami at moving the ball. On the Bulls' first play from scrimmage, a pressured Steven Bench made a scary-looking but clutch throw to Chris Dunkley for 17 yards. Then Shaw went through a huge hole on the right-hand side for 44 yards. The next call was a read option, with Bench keeping for 9 yards. From there, it only took two handoffs to Shaw to pound it into the end zone.

For a moment, it looked like the game might be a shootout. Both teams had easily driven the length of the field, and only six minutes had passed. But the way Miami stifled USF for the rest of the game illustrated the weaknesses of this USF offense, and what they will have to improve to find any success this season.

For starters, I want to talk about the second play of USF's second drive. (Click link for video.) After USF's touchdown drive, Miami easily marched up the field and made it 14-7. USF gained two yards with Marcus Shaw, setting up 2nd and 8 from their own 27 yard line.

USF is in a basic I-formation:

This is something we saw a lot more of today: shifting and motion to change the line strength. This formation starts as an unbalanced line with four line players left of the center. After the motion, there are now three blockers on each side.

MacFarland stays in to block. Bench play-fakes to Shaw, who holds the attention of the linebackers and Miami's right defensive end. There are seven Miami defenders in the box, and and an eighth is just now turning his body to try and cover tight end Sean Price, who is blowing past him. Fullback Ryan Eppes is coming across the formation to set up in the right flat as a receiving option. Wideout Andre Davis (I'm pretty sure that's Andre Davis) is running a deep route into space, and so far only drawing single coverage. Bench is rolling to his right to set up a throw to one of these three targets.

The receivers don't have time to run their routes, and Bench can't get set for the throw. All he can do is scramble away from the intended direction of the play, and he's pulled down from behind for a sack. USF is now in a third-and-a-mile, and we just don't do third-and-a-mile right now.

A similar play was the one that put the game out of reach - Miami's defensive touchdown.

Miami was still moving the ball with ease, and had just driven to the 1 yard line, but Duke Johnson reached out for the goal line and had the ball knocked loose by DeDe Lattimore. (Even worse for Miami, it was 3rd-and-inches rather than 3rd-and-goal, and Johnson appeared to have the first down.) Still down only 21-7, USF took over near its own end zone. The Bulls called two basic running plays to Shaw, getting the ball out to the 7 yard line for a 3rd-and-4.

USF shifted into this formation: 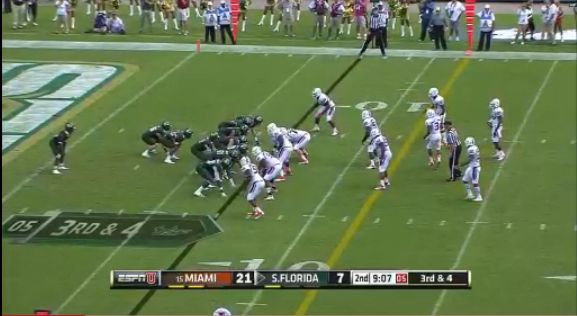 There are three backs, and an unbalanced line to the left, suggesting a power run in that direction. This is a decoy; Bench will play-fake that way, then look right and throw to either the wide receiver, or to the near side tight end MacFarland

You can see that most of Miami's defenders are moving to their right in response to USF's shift, because they have to respect the threat of Shaw. That opens up a whole bunch of room for Bench to make a play to his right.

But nobody picks up Miami's left defensive end, #51 Shayon Green. 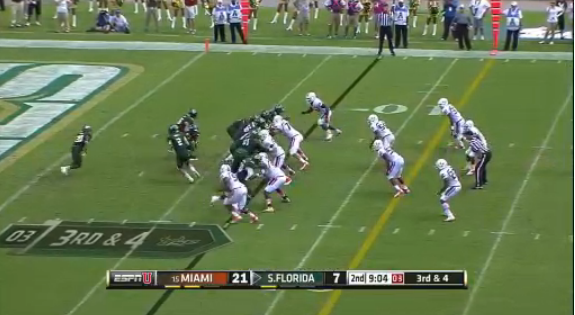 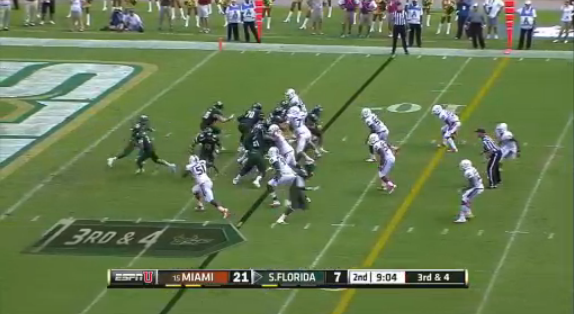 Bench turns and sets to throw to his right, but Green is already in his face. Bench doesn't have time to get his feet moving again, and it's clearly not time for the throw yet - MacFarland's not even looking back at the quarterback.

We all know what happened after that:

Shayon Green wrestles down Bench, who somehow dropped the ball before hitting the ground, and Miami recovers for a touchdown. If you're a regular reader of ESPN.com's game capsules, you immediately knew this would be the "It was over when..." moment.

I'm not sure what was supposed to happen on this play, but this clearly wasn't it. Either:

The lesson in these two plays is how one mistake can lead to disaster. These were both well-designed plays, but blew up in USF's face when blocks were missed. It's tempting to that think better results on these two plays might have changed the entire course of the game, but I don't think so. Miami dominated both lines all game long. It would have taken a perfect game to keep those wolves at bay, and as Coach Taggart emphasized in his post game comments, USF played much less than a perfect game.

USF's offense still isn't good, but at least you can see what Willie Taggart is trying to do with it. He's employing offensive line shifts, to create confusion and to overcome talent shortages by putting more bodies into the blocking. He's trying to set up make-able throws for his quarterback. He's incorporated some spread wrinkles, like the QB option plays we've seen a couple times now. He uses the threat of the run game to set up the pass, and vice versa. And I think it's clear now that the Steven Bench era has begun.

As badly as these two plays went for USF today, I want to see more of them. The worst thing USF's offense could do right now is turn into Shaw left, Shaw right, Shaw up the middle. He's not going to get 120 yards a game if there isn't at least the threat of something else. The offense needs to build confidence, which isn't going to happen if the coaching staff gives up on them. Yes, this will likely result in more mistakes in the short term. But if you're not on the "USF is rebuilding" train yet, there's a seat for you right there. Remember, we've got to get everybody on board, and get them in the right seat.

Despite the outcome, the offense looked much better today. With more practice, confidence, and easier opponents, you can imagine some of these plays working. Some may question the wisdom of throwing on 3rd-and-4 from deep in your own end with an untested quarterback. I prefer to think of it as... rolling the dice.