Think USF Can't Get A Big-Name Basketball Coach? It's Happened Before.

Let's tell you about the other time USF devoted top dollar to a men's basketball coach.

Share All sharing options for: Think USF Can't Get A Big-Name Basketball Coach? It's Happened Before.

For a longtime USF basketball observer, the big names being chased and the rumored cash being offered up for the Bulls' open head coaching position are surprising and honestly, pretty hard to believe. This team finished dead last in the American, a much weaker league than the one they'd finished next to last in the year before. How on earth could you get a proven coach to take this job? Has anyone ever pulled that off?

Yes, and believe it or not USF was the school that made it happen. It's still the biggest coaching "get" the Bulls have ever had in any sport.

Let's go all the way back to the spring of 1980. American hostages were being held in Iran, double-digit inflation was wrecking the economy, and Christopher Cross was a massive pop star. So obviously things were really bad. USF was in the Sun Belt then, and they were horrible (6-21) at basketball. Chip Conner had been fired midway through the 1979-80 season, an event that might have involved Dana Kirk and Big Macs. With the Sun Dome finally opening in the fall after three years of construction, the Bulls or Brahman Bulls or Golden Brahmans or whatever they were calling themselves that year decided to make a splash.

Then, like now, USF came up with a huge wad of money no one thought they had. George Steinbrenner reportedly kicked in $10,000, and the fledgling USF booster club pledged to quadruple its annual support from $25,000 to $100,000. Then athletic director Dick Bowers called his old friend Lee Rose.

Rose was the coach at Purdue at the time, fresh off a trip to the Final Four with the Boilermakers. Three years earlier, in 1977, he took the UNC-Charlotte 49ers to the Final Four as well. Both UNC-Charlotte and USF were charter members of the Sun Belt, and Rose and Bowers co-wrote the league's original bylaws. Rose was tired of the cold, the rough style of play in the Big Ten, and the odd difficulty he had recruiting the region's top players despite his coaching track record. (Most of them went to Indiana and Kentucky, but he had just lost a player to Evansville, for God's sake.) With All-American and future #1 draft pick Joe Barry Carroll graduating, it looked like a good time for Rose to hit the exits before things turned on him at Purdue.

(You can click on all of these pictures and read the full St. Petersburg Times article. They're all available in Google's newspaper archive. Also we think Rose looks like Ted Baxter in that inset photo.) 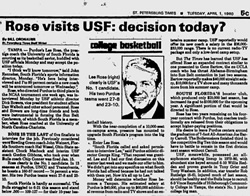 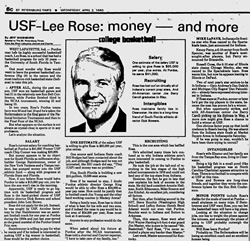 Rose visited Tampa on a weekend at the end of March, and the deal was closed quickly. The total compensation for Rose came to a whopping $86,000 per year for four years. Less than a week after his visit, on April 4, 1980, Rose was named head coach and introduced to the media and students. 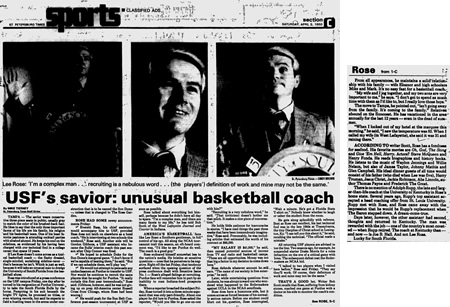 Did it work? For the most part, yes. In his very first year, Rose took USF to its first postseason appearance, the 1981 NIT. The team won both Florida Four tournaments in 1981 and 1982, set a team record for wins and reached the NIT in 1983, then made another NIT in 1985. He recruited and coached Charlie Bradley, arguably the greatest player in USF history, and helped four Bulls get selected in the NBA Draft, including Curtis Kitchen, the first one to actually play an NBA game.

Considering where the Bulls were before Rose arrived, he was a smashing success. But he never reached the NCAA tournament like he had at UNC-Charlotte and Purdue. Maybe people's expectations were higher than what he achieved. Fans soured on him, and his unwillingness to glad-hand and suffer fools certainly didn't help. When Bowers retired as athletic director in 1984, Rose immediately clashed with his replacement, John Wadas, and claimed Wadas was turning the department against him. (Wadas didn't last very long.) When one of Rose's assistants left in 1985, he wasn't given any money to replace him. USF president John Lott Brown scheduled his team to play Division II Tampa behind Rose's back, something he never would have done. By the spring of 1986, Rose had had enough and quit.

Why did USF decide to spend so much money on a head coach? Maybe it was the same reason we suspect they want to spend so much money on one now. They were tired of losing, tired of not mattering in their conference, and tired of not mattering in their hometown. Plus they needed to get someone who could fill the seats in their expensive new arena. It was an investment they were willing to make because while the bill was steep, they felt like they couldn't hope to grow the program slowly and organically. It was time to #DoSomething. In football, you can pay Willie Taggart less to start out because you know if he gets the program turned around, his next contract will have paid for itself in ticket sales and increased donations. It doesn't work like that in basketball. This sport requires some seed money.

Could it work again like it did with Lee Rose? It's hard to believe it wouldn't. If you can deliver a proven coach, someone with an attractive style of play that can energize the community, USF basketball can make something of itself again. (For a more recent example, look at what SMU did this year in a very similar situation.) We'll see what happens now, but if USF does land a big name, it won't be the first time.