Just when we thought there might be a real race for the top spot in this game, Casual Hoya went off and hit another big bet and got their entire lead back from Week 4, and then some. They are now further ahead of the starting bankroll than anyone has been at any point this year, stretching their lead over Chas Rich from Pitt Blather to nearly $130 in fake money.

Or as Casual Hoya themselves pointed out last Friday, they have the biggest d*ck in the band.

Here are the complete results through Week 6, with weekly gains and losses included. You'll see just how badly everyone who loaded up on UConn got burned when we get towards the bottom of the list. Let's just say that the people who are losing fake money are REALLY losing fake money.

Here's the complete Microsoft Excel breakdown, with our cumulative totals and the week-to-week line graph that shows just how violent some of the swings were this week.

Kind of says how far Chris was behind everyone else that the five players in front of him lost a combined $1,010.81, and he's still in last place. To which we can only say: 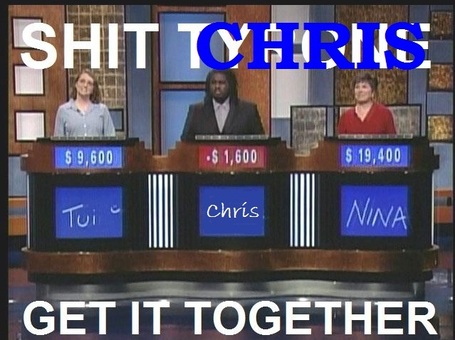 On to the best, worst, and degenerate bets:

BEST BET: Again, you have to give Casual Hoya credit for hitting a big bet. Two weeks ago it was NC State over Georgia Tech and Miami over Pittsburgh, and this week they scored big with Texas Tech -2.5 over Baylor. Even though the Bears hung around for most of the game, the Red Raiders took some semblance of control after halftime and held off a Baylor rally to win and cover at the Cotton Bowl. Casual Hoya had $200 in fake money on this one, winning the biggest single bet of the year so far.

WORST BET: Look, I know I told everyone to try and work in a bet on UConn over Rutgers. And I might have said you could bet $248 on it if you wanted. BUT I DIDN'T MEAN IT. Toro and Andrew both took huge hits by loading up on the Huskies, which looked good until the middle of the fourth quarter when Schottenedsall rolled out his innovative new prevent offense. If I had to pick between the two, I'd go with Andrew for the worst bet, since he already made a giant homer bet against Temple and failed just as miserably then. He's lost a total of $448 on two games.

MOST DEGENERATE BET: I might need a non-Scott division if he keeps coming up with 15-team teases. He even volunteered that it was as big a tease as our odds source would allow, so I think he was implying he might have done an even bigger one if he was allowed. Fortunately, the first team he had listed in his tease was Alabama -1 over South Carolina, so I didn't have to check any of the other games.