Ryne Giddins Does Not Lack Confidence

Share All sharing options for: Ryne Giddins Does Not Lack Confidence 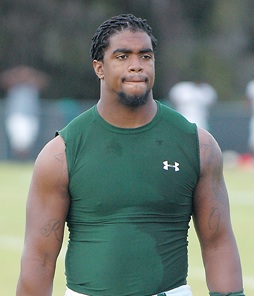 Two sacks per game, eh? Let's see, 12 games on the schedule and two sacks in each, plus if he was on that kind of tear then it would have to mean the Bulls qualify for a bowl, so add another game, and that's... 26 sacks. That might be a record.

But wait, he did say "if I'm out there for 60 minutes." Let's assume he plays every defensive snap and averages one sack per 10 pass plays, since he says he can get two sacks in 20 plays. According to Page 89 of this spring's media guide, USF opponents threw the ball 387 times last season, and were sacked an additional 38 times. (Plus there were surely some called passes that ended up being runs, but you would need game film to figure out how many.) Let's assume an equal number of attempts this year. So by my math, Ryne Giddins has pledged to record at least 42.5 sacks this year. I think he has his work cut out for him, but what the hell do I know.

(H/T: The man with the spectacular mustache who runs EDSBS.)