The Most Important Player for USF Basketball - Number 15

Share All sharing options for: The Most Important Player for USF Basketball - Number 15

Before the season started, I made a list of all 15 Bulls on the basketball roster, and ranked them in importance to the basketball season. As you will see in the coming weeks, I undervalued some, and severely overvalued others. Now that the season is over, let's redo the list and see how bad I did.

So without further ado, the 15th most important player for USF Basketball this season is B.J. Daniels! 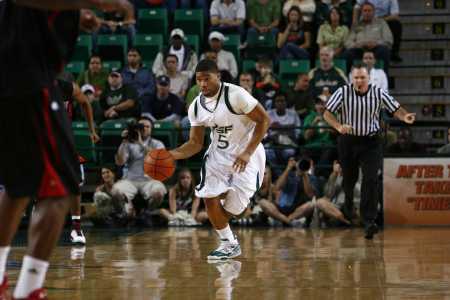 Daniels was pegged in at Number 14 in the preseason countdown, so this wasn't a huge letdown. After playing only 3 minutes a game as a freshman, B.J. wasn't expected to do much for the BasketBulls this year after becoming the heir apparent at QB for football. Even though there was some speculation that Daniels might drop basketball and only play football, Daniels said during iBowl practice that he was going straight to basketball practice once his trip to Toronto was complete.

So it surprised everyone just a little that Daniels announced he was going to leave the basketball team and focus solely on football. After the coaching change, having surgery to repair a partially torn rotator cuff, and adjusting to an entirely new offensive scheme, it looks like Daniels made the right choice.

For our first poll here on V5, we ask who should be Number 14 on TMIPFUSFB Countdown? We will announce who will grace the next spot on our countdown Wednesday, so check back then.