After a week long hiatus, the TMIPFUSFB returns as we unveil number 11 on the countdown. To recap, here is the countdown so far, with their preseason rank in parenthesis:

Now onto today's selection. After going back and forth between Shaun Noriega and Mike Burwell, I asked Voodoo his thoughts on who should be next. He said, "At least Noriega was being considered to crack the rotation." I'm sold, so Number 11 on The Most Important Player for USF Basketball Countdown is Mike Burwell! 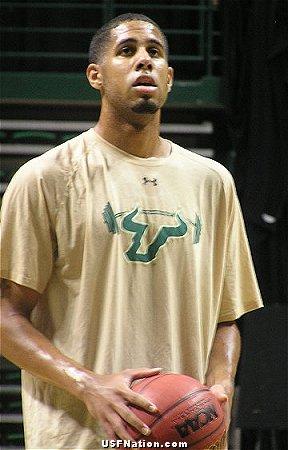 I had Burwell in at number 8 in the preseason countdown hoping one of the 3 freshman guards would make an impact, but as you know this didn't happen. Burwell played in 19 games this year for the Bulls, averaging 4 minutes, 1.2 points, and .7 rebounds a game. Burwell's best game this season was the USF v USF matchup in Vegas where Burwell scored 7 points and grabbed 4 rebounds. Stan called on Burwell for added depth in the post after the Gus Gilchrist injury, and Mike held his own down low all things considering. After Alex Rivas came back from his double shin surgery, Mike's role was limited to handshakes and chestbumps as he joined Ryan Kardok and Noriega on the bench.

Burwell should have a bigger role on the team next year with Jones and Mercer gone from the team. Burwell will compete with incoming wing Hugh Robertson and Shaun Noriega for time at the 2 and 3.

No poll today, as we all know who will be number 10.