Before the season started, I made a list of all 15 players on the USF basketball roster and arranged them in order of importance to the team's success this year. Now that the year is over, I've decided to redo the list and see how I did.

Here is the list so far, with their preseason rank in parentheses:

Now onto Number 13. I've gone back and forth over this pick all day, but after flipping a coin, Number 13 on The Most Important Player for USF Basketball countdown is Ron Anderson Jr.! 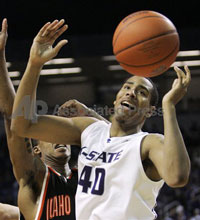 I had Ron in at 13 as well in the preseason so I can at least say I was right on two people. Ron transferred to USF from Kansas State last June, and Anderson sat out the year because of it.

Last year, Ron averaged five points and five rebounds a game in about 18 minutes of action with the Wildcats. Anderson's numbers should improve next year, as I believe he will take a starting job away from someone. He is the strongest post player USF has, which should help considering we were flat out dominated by some of the stronger posts in conference this year.

Now V5 readers, who do you have coming in at Number 12? The Choices are below, and we will reveal our selection on Wednesday.