Share All sharing options for: "15 For 15" - The 9th Greatest Player In USF Football History Is...

George Selvie is the most decorated player in USF football history. He's the only two-time All-American, and he was a consensus All-American in 2007. Phil Steele named him to his All-Big East first team three years in a row. He started more games than any player in USF history, a total of 50. He has the school's single-season records for tackles for loss (31.5) and sacks (14.5), along with the career records of 69.5 TFL and 29 sacks. All that, and he's only #9 on this list? We're sure there are coffee cups being dropped all over town and hate mails being mentally composed to us right now.

We'll get to our reasons for that in a minute, but first… how much of Selvie's backstory do you remember? Just that alone is remarkable. Do you remember the story about the Buick that rolled off a car jack while he was playing in the driveway as an infant and rolled onto his head? (He still has a dent in his head from that accident.) Do you remember that he was a middling two-star recruit coming into USF, and that he originally signed on to play center? Do you remember his heroic and memorable struggle with Honey Bun addiction? Selvie was as good of a story as he was a player - one of the more unlikely stars you'll ever see.

We saw flashes of Selvie's greatness in the upset of West Virginia to end the 2006 season. He had eight tackles, 3.5 TFL, and a forced fumble, plus he recovered a fumble and ran it in for a touchdown. (The Bulls never trailed after that score.) But that was just a prelude to the binge he went on during the first half of 2007. In just six games, Selvie rolled up 21.5 tackles for loss, 11.5 sacks, eight quarterback hurries, and two forced fumbles. He was a holy terror, becoming a household name in college football.

It turned out that the half-season of dominance was both a blessing and a curse. It gave Selvie a huge reputation that carried on long after his production leveled off, but that also meant for the rest of his career in green and gold, he was the first guy that opposing offenses would game plan against. Everyone started double-teaming the undersized Selvie, and some of the giant tackles in the Big East were able to handle him alone. And then this happened: 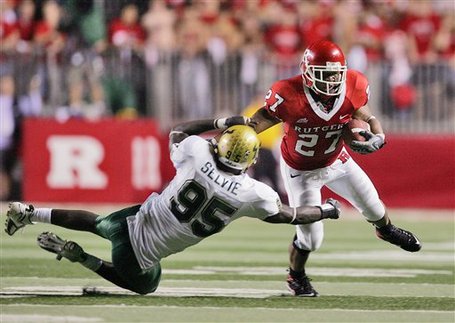 I don't know exactly what slowed him down after that. Maybe it was the extra attention other teams were giving him. Maybe everyone was adjusting to his freakish speed off the edge. Or maybe he just couldn't keep living up to that insane pace he had set for himself. But Selvie didn't quite seem the same after that play. (Neither was the team.) Even in his senior year, when he had bulked up to 250 pounds and he had Jason Pierre-Paul lining up at the other defensive end spot, Selvie only managed 3.5 sacks. It was as if Ray Rice had taken all of Selvie's mojo and ran off with it down the sidelines.

So that's why we put Selvie at #9 on our list, and not higher than that. It was probably unrealistic to expect him to have two more years that were as productive as the 2007 season. (If he had, Selvie would almost certainly have been #1 on this list.) But it doesn't change that he was really, really good, a player who deserved to be drafted and finally was by the St. Louis Rams in the seventh round this past April. And it doesn't change that he owns, by far, the most dominant stretch of football that any USF player has ever had.