It's time to see where everyone is placing their fake bets in Week 2 of the "Protect Your Unit" Game. Click here to look back at the Week 1 carnage, as most of us started proving that indeed, we don't have a freakin' clue what we're doing here.

Disclaimer: This contest is for entertainment only. No actual wagers are being made. Also I wouldn't recommend taking any of these picks as advice if you've seen how we all did.

Again we'll lead off with Hoya Suxa, who somehow came out the furthest ahead last week. Coincidentally, he also had the most fake money on Syracuse. Mr. Glaude, if you please.

It was a little odd at first, but it's now quite comfortable resting my balls on your collective chins.

I'm now swimming in $65.91 that I didn't imaginary own seven days ago. Given my track record with responsible decision making, you'd think that I'd already have squandered it on something stupid like putting it toward future graduate school tuition at Georgetown University.  In fact, I actually have a game plan for my future "Protect Your Unit" fortune.

Right after receiving my fake winnings, I took it to The National Confederated Bank of Phony Money and had it all changed into nickels and pennies. I had the teller put it all into a white bag with a big ol' green dollar sign on it (the bag seemed like an appropriate accessory for the monocle I was wearing).  After getting it home to the Glaude Mahal, I dumped it all into my vault wherein I plan to swim in all my gains from this contest, not unlike the great financier, Scrooge McDuck.

Here's a hastily created artist's rendering of Hoya Suxa diving into his pile of loot: 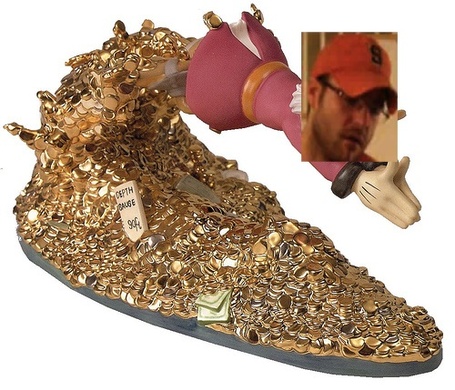 WAGER ONE: West Virginia at Marshall

I implemented a self-imposed wagering rule last week that limits all of my bets to games with a point spread of 10 points or fewer. Unfortunately, there isn't a Big East game on the board this week with a line within that limitation set.  The closest line is the annual "It's Not Sister Sex, It's Love Bowl" between West Virginia and Marshall.

I wouldn't trust Bill Stewart with important things like operating heavy machinery or rudimentary linguistics, but even he can manage to put Marshall away in a laugher. The Mountaineers cover the 12.5 but, as we all know, the real winner here is everyone that doesn't live in West Virginia.  $50 to the window.

Let's get feisty, people. We're going three-way and I'll feel no shame or inadequacy on Sunday morning: Georgia (+3), Michigan (+3.5), and Brigham Young (+1) in a parlay that will make me a bazillionaire.

$100 on the all-dog wager (herein and forever referred to as the "Woof! Woof! Bet"). Don't disappoint (or convert) me, you daffy Mormons.

Next we'll let last week's other winner, Sean Keeley of Troy Nunes Is an Absolute Magician, give us his picks.

$25 on Syracuse +13.5 against Washington
I should probably jump off the Syracuse gambling bandwagon before it crumbles but I just can't. Orange do well ATS and I just feel like they're going to play it close. Don't know if they'll win, but I think it will be respectable. Which is something, all things considered.

Ah, moral victories. Although on the other hand, that's all any of the rest of us can claim so far this season. The losers' bets after the jump.

Kevin Meacham from The UConn Blog is up next. He's already turning on Edsall, and oh look, how cute, a $1 spite bet!

3) $10 on UNDER 56.5 for Auburn-Mississippi State, because things that have happened in the past will always happen again.

4) $1 on Florida (-15.5) to cover easily over South Florida. I'm thinking somewhere in the neighborhood of 175-7. That should leave Florida plenty of time to get its backups some reps in the third and fourth quarters.

5) $25 on the Notre Dame money line (-175). I think Brian Kelly might know a thing or two about defending a Pat White-type quarterback, unlike Randy McNoCommentOnInjuries.

And finally, the Week 2 "Hedge With Hate":

I expect these bets to remove the Orange menace from the top of the PYU standings.

$110 to win $100 Teaser - FSU +13.5 over Oklahoma, Miami +14 over OSU. There's no way Sweatervest beats a good team by 3 scores. And rumor is FSU might be a better coached team this year with someone that has all his faculties and actually uses swear words.

$55 to win $50 - Alabama -12 over Penn State. See faculties argument above. And Nick Saban hates old people. And since he's playing, so does Mark Ingram apparently.

$55 to win $50 - BASTARDS +18.5 over Weasels that used the "we didn't have an AD and didn't know what we were doing" excuse when they signed the game. Gimme the team that opened with a bye, thus ensuring they're even more ready to hit someone they don't know.

$1 to win $5.00 - USF money line over Florida. We've done it so many times... What's one more miracle on the road getting double digits?

And here are mine:

We call them SCUMBAGS because they were supposed to play USF to finish up a 2-for-1 series last season, and dumped the game in February of 2009 to run off and start a series with Rutgers. No one in the league office stopped this. USF had to sign up another FCS team to fill the gap in the schedule, and that team ripped up Matt Grothe's knee. Thanks a pantload, Marinatto. I actually wish I could bet on whether a nuclear warhead will strike this game, because I would definitely load up on the money line for that one out of sheer spite.

Put $110 down on this one. I'm all about finding value and these lines become asinine when you give me six points. This is going to come through, I promise you.

USC might get there on its own, and if not then their crap defense will make sure it gets over the mark.

I can't believe Oklahoma is favored, and last year FSU came up aces in their big non-conference road game at BYU. The Noles are winning this game.

Continuing our way down the list of losers, let's go to Scott at Bearcats Blog, who is already whinging about his picks.

That 5 team parlay is the halfcourt shot of the week. Jesus, this is right into last place.

That's amazing, it's not even mid-September yet and he's already mentally throwing in the towel. Gambling's a bitch, even fake gambling.

Now let's go with WVUIE97 at The Smoking Musket for his picks.

$50 Alabama (-12) over Penn State - Ingram or not, Joe Pa with a freshman QB on the road in the heart of SEC country....Tide rolls

On to Casual Hoya:

Sorry for the lack of commentary, but here are casualhoya's picks this week. Shocking how work gets in the way of poor college football wagering.

Again, if you missed it, Dread Pirate Leach is doing commentary for that NC State/UCF game. CBS College Sports Saturday night, you do not want to miss it.

Now we're getting into the guys who really stunk it up last week. Andrew Porter from The UConn Blog, what say you?

When the best game -- gambling wise -- was a push with the Pitt game, it clearly wasn't a good week. I may have been the only one as upset as Navy Coach Ken Niumatalolo with the way Navy squandered chances. So glad I don't do this for real.

Does this game count as a Big East game? Not yet? Okay. Both had patsy warm-ups. I trust neither. But something about UCF screams that they are heading for disappointment.

Bill Stewart against one of his former assistants in a one-sided fake rivalry game. I don't expect WVU to lose, I just don't thing it will be by more than 10. I have no idea if Doc Holliday is any good as a head coach (as opposed to a recruiter), but he should make things interesting.

It's C-USA or bust with this week's games. Revenge for Houston after last year's debacle, so I expect Houston to contribute the lion's share. Both teams have offenses that will pile up points.

And finally, the man bringing up the rear after Week 1, the guy who shot first and asked questions later with a brazen opening night bet on UAB, Chris Lane of The Nova Blog.

I know all about the reverse line movement here, but I just don't see a way that Miss State wins this game. The biggest reasons I've heard from Miss State supporters is that it's a Thursday night game and they are at home. No argument about them being more talented, better coached, etc. Auburn has owned this series in recent years as well.

Kansas scored 3 points on North Dakota State (I had to doublecheck that). Georgia Tech is going to run rampant. Rutgers is my BIG EAST game. I didn't really like anything all across the conference, so whatever. Hawaii has to travel a long way, but I'm shocked they are underdogs after playing quite well against a clearly underachieving USC team last weekend.

I could see both teams playing this game in the 30's. Both offense look good, both defenses look average.

And finally, there you have it, all 12 players and their picks. Check back on Monday to see how everyone did. I expect more pain and suffering, but just remember this -- we're doing it all for you.