Spring Scrimmage Wrapup: The Quinterrius Period May Be Upon Us

Share All sharing options for: Spring Scrimmage Wrapup: The Quinterrius Period May Be Upon Us

With Saturday's first spring scrimmage closed to the public, we don't have too much to work with other than what the coaches and players told everyone after it was over. After watching everyone's interviews (all available here from GoUSFBulls.com), what we're left with is:

Skip Holtz's main goal from this scrimmage was to get some good film on everyone and use it to help the coaches come up with a depth chart. He specifically mentioned Reshard Cliett on defense, who's moved down from safety to linebacker, along with safety Mark Joyce as players who did well. Also, running back Darrell Scott and right tackle Quinterrius Eatmon were standouts on the offensive side of the ball. We're not sure which group any of them lined up with (there's no depth chart yet, but whoever the 1's are went 50 plays, and the 2's and 3's went 60 plays each), but Holtz was pleased with them all. Especially Eatmon, who redshirted last year and hasn't had many opportunities to play in a game-like setting.

"[Eatmon] has been working with the first unit for the most part, and I think he's shown that he deserves to be there... I think he's done an amazing job for a young guy being on the offensive line, where it's so hard to play early...

"Really, he was pretty invisible. That's a good thing, because when you're young you show up, normally, a lot in a bad way. You give up a sack, you jump offside, you go the wrong way... but he was invisible. He did a really nice job."

Sure sounds like Eatmon has the inside track to being at the top of the heap at right tackle when it comes out on either Tuesday or Wednesday. We could just call it the Quinterrius Era and be satisfied, but let's try this one instead: The Quinterrius Period. You know, like he's some kind of giant, armor-clad dinosaur lining up to devour defensive ends for the next four years.

We couldn't find any pictures of Eatmon in our photo library, so we sent away for something from the archives and got this back. It appears to be an action shot of him pancaking a defensive lineman: 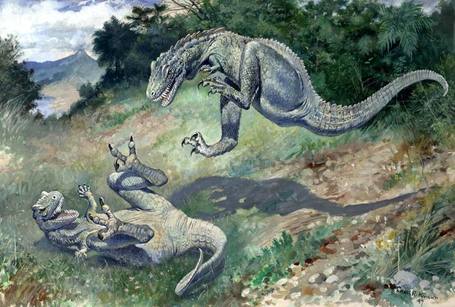 The Quinterrius Period could also be marked by the kind of offense we haven't seen since the days of Andre Hall -- instead of having the quarterback run around and try to make every play, everyone lines up and tries to run the defense over. My speed-power continuum from last year may end up changing a lot by the fall (and not just because I finally have to add Syracuse to it). We'll find out soon enough.