We try and limit ourselves to one week a year where we use memes. And this is that week.

Last year, of course, we were all much more fired up for the Big East tournament. USF had 19 wins in the bank and could still have played their way into the NCAAs. There were pictures of suits, and Courage Wolf, and the "anarchy" clip from Talladega Nights, and live blogs, and a bunch of other crap. This year, not so much.

The problem is that the Bulls aren't likely to hang around New York very long, and like I said last year, the conference tournament is about two things: 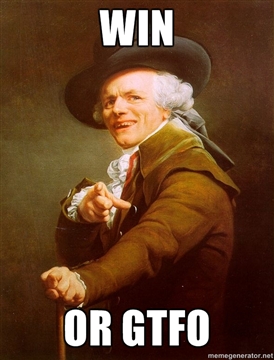 We're predicting not much winning for USF and lots of GTFOing. But maybe we'll be wrong and Mr. Ducreux will get some more run**. Oh, and there may be some other tricks up our sleeve.

* - We were originally going with Charlie Sheen, but isn't all that getting a little played out at this point? All this talk about winning and tiger blood and F-18's and warlocks and stuff. EVERYBODY is doing Charlie Sheen jokes, even the Red Cross. Pretty soon Bianchi or someone is going to reference him in a column and it will be officially done.