What To Do While At Notre Dame

Share All sharing options for: What To Do While At Notre Dame

Unless you have family that has tickets to Notre Dame games, chances are you've never been to South Bend, Indiana. Thankfully, burger23 over at our sister site One Foot Down was willing to let us know where to go when you head up this weekend. We are splitting this up in two parts, because this reached 2000 words after everything was all said and done. Part 2 will be up tomorrow. To follow along, here is a map of Notre Dame. Take it away, burger.

Hello Bulls fans. Ken asked me to write up a list of things to do in South Bend for the USF fans making the trip up to the murky corner of our country known as Indiana. The University actually has a website with a bunch of useful information (even a how-to on how to tailgate, in case you're a novice in that area, too) and can be found here. Speaking of tailgating, you may have heard some stories about ND's draconian policies when it comes to alcohol, and while they have been much better (or so I hear) the past few years, the cops aren't afraid to break up a tailgate or throw you out of the stadium. Just don't serve minors or be a belligerent asshole and you should be fine. Just wanted to get that out of the way.

Anyway, on to the good stuff.

There's really only one thing to go in this section: The College Football Hall of Fame. Personally, I've never been there. I know, I know. I lived in South Bend for four years and managed to never go to the Mecca of college football fandom. It's one of my regrets. The HOF is moving to Atlanta in September 2013, so if you miss it on your trip, it will be moving a lot closer to Tampa in a few years.

Notre Dame isn't a very big campus. You can easily walk from one corner of campus to the other in roughly twenty minutes. But there's plenty of things to do, and no matter how early I get to campus, I always feel like there were things I missed or didn't have time to do. But if you're coming up for multiple days, you should be able to fit in everything you want to see, though.If you came into town on Friday and are looking for something to do on campus, you have two pretty good options. The first is the Dillon Hall Pep Rally, put on by the men of Dillon Hall -the biggest, best, and most humble dorm on campus. Admittedly, Notre Dame pep rallies aren't the best because the administration wants badly for everything to be "family friendly." But those guys do a bang-up job, Kelly and the team will be there, and Fr. Doyle will do a crowd dive. The pep rally takes place at 6:00 outside of Dillon.The other event to check out is drum circle at midnight on Friday outside the Dome. It's basically used as a big pregame for everyone's Friday night debauchery, so if you feel like hanging out with a bunch of drunk undergrads, check it out.There are a number of spots on campus you'll want to check out, whether it's on Friday, Saturday, or Sunday. First off, you might be tempted to visit the bookstore, but stay away at all costs on Saturday before the game. Unless you really really want a souvenir and can't go at any other time, you'll end up wading through a sea of people to look at merchandise that was marked up 200% because it has a ND logo on it. Then you'll stand in line forever when you could be out doing something fun. So beware. It's not nearly as bad on Friday or Sunday, so go on one of those days if you can.Of course, the biggest attraction for college football fans will be Touchdown Jesus. Watch out for fellow visitors taking pictures of family members making the Touchdown Jesus pose in front of the building. You can do it, too; I won't think any less of you. The building itself is the library, so you can go in if you want but you won't find anything particularly interesting. Also, the water in the reflecting pool is dyed blue. Just a warning in case you feel compelled to jump in for some reason.Whether you're Catholic or not, I would suggest stopping into Sacred Heart Basilica, even just for a few minutes. It's right next to the Dome, so you'll probably be in that area anyway. It's a beautiful building with some really interesting artifacts in the alcoves along the side.Right behind the Basilica is the Grotto, which is absolutely a must-see. Take in the atmosphere and light a candle if you want. Words can't really describe what it's like; it's something that needs to be experienced. 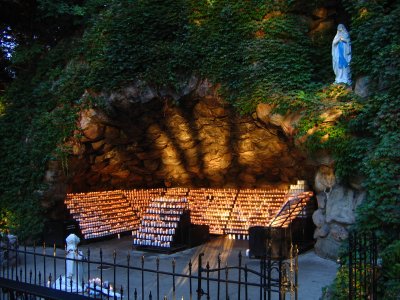 via www.brendanloy.comFinally, maybe my favorite gameday tradition is the band's concert on the steps of Bond Hall. Bond Hall can be found to the east of the Dome. If you're facing the front of the Dome, go to your left until you pass the dorms and end up on another quad. There will probably be a mass of people there, so you can't miss it. Ninety minutes before each game (so 2:00 in this case) the band plays some songs for the crowd before starting their step-off towards the stadium. I always enjoy it, so I suggest giving it a look. However, the best part is after the concert. After the band plays the alma mater, head for the Golden Dome and get upstairs as quickly as possible. The trumpets come in and play the fight song in the rotunda. It's pretty impressive. I had some friends in the band who claimed the saxophones played in the bathrooms, but I never saw it, so I can't confirm if that's true or if they were just messing with me.

That's it for the things to do around campus. Tomorrow we will have your required eating establishments while in South Bend.