The Anatomy Of A Non-Upset

Share All sharing options for: The Anatomy Of A Non-Upset

As Voodoo said earlier, there was something dissatisfying about this apparent blowout of UTEP.

Watching the game online from my remote outpost in Nebraska, what I noticed was that UTEP could have really gotten into this game if a handful of plays had gone differently. More specifically, it seemed like every time Mike Price drew up a play that could have been a key moment in an upset, Miners quarterback Carson Meger misfired on the throw. As a result UTEP never pushed the game to the level of "holy crap, they could actually win this" that has to be reached before an upset becomes possible.

In baseball statistical analysis, there is a concept called leverage. It measures the importance of a game situation (inning, outs, baserunners, and the score) as it pertains to ultimately winning or losing the game. This is tougher to quantify in football, but anyone can see that some plays are more critical than others.With that in mind, I'd like to take a look at a few plays that could have changed the direction of the game.

It's late in the first half, and underdog UTEP is driving for one of those momentum-changing touchdowns that football announcers love to prattle on about. It'd still be a 10-point game, but neither defense has offered much resistance, so "zany, WAC-style, last-team-with-the-ball-wins shootout" is certainly a direction this game can take. If UTEP can make this 31-21 going into the half, they'll be right in this game.

Here's UTEP's formation for this key third and goal play: 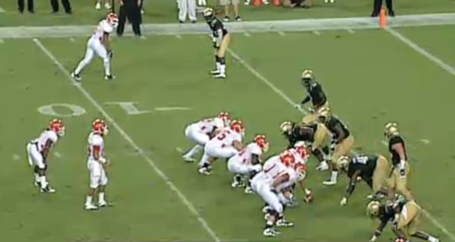 The play call is a screen pass to the running back, Vernon Frazier. The wide receiver at the top of the screen runs a route to the middle, taking the cornerback with him, and creating space for Frazier to receive the ball. Unfortunately for UTEP, this happens:

The pass is thrown too softly, and behind Frazier instead of leading him. He has to stop and come back for the ball, and cannot make the catch.

As you can see in the bottom shot, there's nobody within five yards of Frazier. Jerrell Young is lurking, but the play design gives Frazier space to get around him. If Meger throws a proper screen pass here, this is a touchdown for UTEP. Instead, it's an incomplete pass and a field goal.

The football media loves to talk about "big plays," but this is an example of a small play that made a big difference in a game. It's not a stretch to say this poor screen pass cost UTEP four points. Not to mention the intangible psychological benefits of a strong touchdown drive just before halftime.

As an aside, USF ran a similar screen pass in the second half, to Lindsay Lamar. But notice where B.J. Daniels puts the ball:

Daniels hits Lamar right in the chest, and with a little zip on it, so he can collect the ball without having to change direction or break stride. Only Lamar's head has to turn towards the quarterback; his feet are pointed in the direction he wants to go, unlike Frazier above. Also unlike Frazier, he scored a touchdown on this play. (This is the play that made the game 45-28.)

Much more after the jump!

Okay, that's enough of the screen passing seminar. Now to look at some other good UTEP play calls done in by poor throws from their quarterback:

This play is from the same drive as the screen pass above. Meger could have eliminated the need for that screen pass by hitting a wide-open Mike Edwards on this play:

But the ball is underthrown and falls harmlessly behind him.

#30 JaQuez Jenkins, one of two backup cornerbacks replacing the injured Quenton Washington, bit on a pump fake, and was out of position for the deep ball. UTEP would try to exploit this tendency in USF's defensive backs all game long.

To set the scene: UTEP scored on its previous drive to make it 38-24. USF's offense went on a drive, but stalled about the UTEP 40. A punt gave the UTEP the ball at its own 20. They failed to gain any yardage, but picked up a first down on a gutsy fake punt. Now UTEP has first and ten near midfield, only two scores down, and the excitement of a successful trick play coursing through the team's veins. Greater upsets have been built on less.

UTEP lines up in a rather vanilla formation...

...and appears to call a vanilla first-and-ten rushing play...

But the pass is underthrown, where Ricardo Dixon can break it up:

As in the Frazier example above, note the receiver Lavorick Williams turning his body back towards the quarterback. Williams had a step on Dixon, but had to give it up to try and catch the ball.

You might also have noticed a little holding going on in the above photos. The referees noticed too, so this play wouldn't have counted anyway. But it's another example of UTEP drawing up a great play that could have redefined this game in their favor, only to be done in by its own missteps. After this play, the Miners went three and out, ending their best chance to challenge USF's lead.

If this play goes for six, or even sets up a touchdown, the tenor of this game changes completely. UTEP would have cut the lead to 38-31, the closest they'd been since closer than they'd been since Victor Marc's hilarious rumble through the UTEP defense. That thing should have had "Yackety Sax" playing in the background. But nobody at Raymond James would have been laughing if this had become a one-score game.

There's one other play I want to look at:

UTEP going for it in fourth down, since a field goal does them little good here. UTEP in short-yardage package. USF packing the box, expecting run.

Instead, Meger fakes the handoff. Excellent ball-hiding technique, by the way: 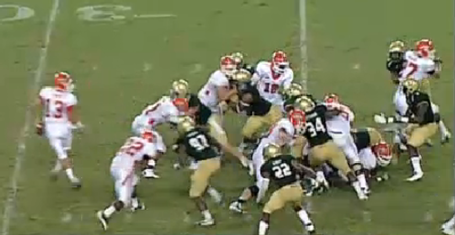 In the above shot, #22 George Baker is planting his left foot in a desperate attempt to reverse his direction and chase the receiver. But it's too late. He has swallowed the bait, and the receiver, Kevin Perry, is way past him. All Meger has to deliver a catchable ball and this is an easy touchdown for UTEP... 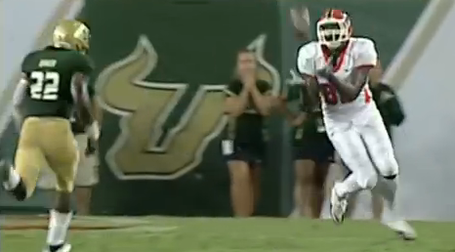 ...which he does, hitting Perry right in the chest. He makes the catch and walks into the end zone. Touchdown Miners. USF's lead is cut to two touchdowns with almost 20 minutes left to play. UTEP can still win this game.

I included this play as a counterexample. Any of the three prior plays could have resulted in a big touchdown like this one did, had Meger not misfired (and also holding in one case). Also, I wanted to show that Carson Meger didn't miss on every key throw he had to make, because I feel like I'm picking on him a little bit with this article. He played a very good game, made a lot of good throws, and it wasn't his fault USF scored six offensive touchdowns. But if Meger had made a couple more throws like the one to Perry, this would have been a much different game.

That's a lot to ask out of a quarterback making his first start, on the road, against a Top 25 team. But that's the level of performance it can take to pull an upset like that. And that's why it doesn't happen very often.