That game was so freakishly bizarre that it's hard to know where to begin. Even if you did, who knows if what you could say would do any justice to the absolute spectacle that took place?

The game would have been insane enough without any help from the weather. Notre Dame Stadium doesn't have enough room to shelter 80,000 fans from a thunderstorm. Twice the entire stadium had to be evacuated as fans took cover in tunnels, in the basketball arena, in any building they could get to before severe weather hit. (A good thing, since lightning actually hit the press box during the first weather delay. If it had struck any of the bleachers and people had still been out there, it might have killed them.) All told, the game stretched out to nearly six hours, or about as long as your average extra-inning MLB playoff game. It reminded me of how I felt watching the marathon Game 2 of the Rays-Red Sox ALCS a few years ago... inning after inning going by, waiting for Boston to run out of good pitchers and then hoping the Rays could break through once they did. It was incredibly nerve-wracking to watch the game and then have to wait out the delays. Maybe even worse than the Auburn game.

Then you look at all the things that happened during the game. Every time the two teams took the field, the Irish looked like they'd been shot out of a cannon for about 20 minutes. Then the weirdness would strike, and it was almost always Notre Dame on the short end of it, right when it would cause the most damage. The Jonas Gray fumble (or rather, Jerrell Young ripping the ball out of his hands) and Kayvon Webster running it back 96 yards for a touchdown. Harrison Smith canceling out a big loss by the Bulls with a senseless face mask penalty. A touchdown called back by a holding penalty, then Dayne Crist short-arming a pass into the end zone and DeDe Lattimore intercepting it. Dropping so many passes I couldn't even count them, and usually on third down. Theo Riddick (boy did he have a terrible game) muffing a punt and setting up the Bulls in field-goal range.

Wait, there's more. That all was just in the first half. Tommy Rees, who replaced Crist in the second half, hitting T.J. Jones in the side of the head with a pass inside the USF 5-yard line and Michael Lanaris making a diving interception. David Ruffer missing a pretty easy field goal to destroy the Irish's third-quarter momentum. A brutal personal foul penalty against Notre Dame that helped move USF's only touchdown drive along. A pass interference penalty on third and goal that gave the Bulls more chances to finally get it in the end zone. Rees throwing a two-point conversion pass out of bounds to keep the deficit at 10 in the middle of the fourth quarter. More dropped passes. More penalties.

I know the media narrative of the game is that Notre Dame beat themselves and USF isn't getting their due credit, but come on... Notre Dame totally beat themselves. They gained exactly twice as many yards as the Bulls (508-254). Rees threw for more yards in the second half (296) than the Bulls gained in the whole game. USF was 2-for-14 on third down and only gained 3.5 yards per play. Michael Floyd had more yards receiving (154) than the entire Bulls team (128). But then you get down to the turnover category and there's a "0" in the USF column and a big fat "5" in the Irish column. Yes, the Bulls capitalized on enough of those mistakes to win the game, and it's not like Notre Dame deserved to win or anything. But not even Neo could dodge this many bullets.

And again, this is where Skip Holtz should get so much credit.

How difficult must it have been for him to manage his team today? With all the hype around his own return to his alma mater and his dad's most famous coaching stop, and the national TV attention, and the fact that it's Notre Dame, and then all the ridiculous weather delays? It would have been so easy for Skip's team to fall apart when they had to keep kicking field goals in the first half. Or to lose focus after having to stop and start and stop and start. Or to get caught thinking ahead to what it would be like to win the game and not take care of actually winning the game. Or to wilt when the Irish came out guns blazing in the third quarter. Maybe this wasn't the best X's and O's game a USF coach has ever had, but as far as managing people and situations, Skip Holtz's performance today has no equal.

During the game NBC showed a clip of the "my wife's son" play when Skip roughed the USC punter in 1986. Today Lou's wife's son made everyone proud.

-- You know how beating Florida State two years ago didn't look as good by November because the Seminoles were kind of awful? Well, this win could age very nicely as the season goes on. I'm still convinced Notre Dame is a good team, and nearly all their mistakes today are correctable with a little attention to detail and a few hundred F-bombs. I think they'll get their bearings back and be just fine.

-- The passing offense needs some more work. B.J. Daniels took care of the ball and never put it into any dangerous places, which deserves praise. But eventually Holtz and Todd Fitch will need to ask him to do more than what he did. I don't know if Daniels completed more than one pass that went more than 10 yards down the field. I'll have to go back and see how many players the Irish had in coverage on some of these passing situations, and check for linebacker spies. But he will have to make more plays throwing the ball.

-- The one play he did make throwing the ball... how about that touchdown to Evan Landi? That's the kind of play I run with my high-school-aged brother and his friends when we're playing touch football in the park. I just lob the ball up there while the defender isn't looking and the receiver goes and finds it. And the only reason I even make that throw is because it's touch football with kids half my age, and not the fourth quarter at Notre Dame. I mean, who cares if I throw a pick? It was so sublimely ridiculous that I just started laughing when the official signaled a touchdown.

-- It's pretty encouraging that the Bulls played about a B to B- game and still won at Notre Dame, isn't it?

-- Human beings cannot turn much redder in the face than Brian Kelly did after the Lattimore interception. Observe: 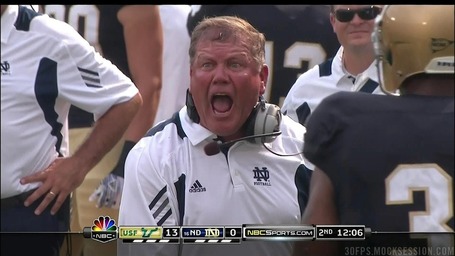 -- Well, actually he did turn even redder after the Lanaris interception, and this time he couldn't even blame the heat and humidity because it was like 20 degrees cooler after the first delay. The "Brian Kelly is going to choke a bitch" jokes were all over Twitter. I would not have wanted to be in that locker room with him for two hours at halftime. It might have made Jim Leavitt's headbutting routines look genteel.

-- I noticed when Notre Dame was running up and down the field in the spread that the Bulls still had at least two linebackers in there. Lanaris and Sam Barrington were in there for sure, and there might have been more. Rees definitely took advantage of that in the seams. (Tight end Tyler Eifert had six catches for 93 yards, almost all on seam routes.) I wonder if the coaches didn't feel like they had enough DBs ready to play and that meant they couldn't match up with a dime or a quarter package. Then again, they did some of the same things against Cincinnati last year when Zach Collaros had a field day.

-- It took nearly the whole day before the NBC crew mentioned the trailers. The game was on Versus by the time Dan Hicks brought it up. That's pretty impressive.

-- I still don't like the green helmets, but now we're probably going to see them until the end of time, so I guess I'll stop wasting my breath and keystrokes. Oh, and could the NOB lettering on the back of the jerseys be a little bigger, please?

-- I'm watching College Football Final as I write this, and Lou Holtz is so giddy as Rece Davis sets up the highlights of the game.

-- Can someone total up the guarantee money USF has been paid for games that they ended up winning? It has to be up to at least $1.5 million by now.

-- This is the fourth time in the last six years the Bulls have beaten a ranked team on the road. And tomorrow there's a decent chance USF will be ranked for the fourth season out of the last five.

-- Don't take too much time to celebrate. The home opener with Ball State is next Saturday. I hear there are still tickets available.