Realignment, Again: How USF Could Get Left Behind All By Itself

Ready for USF to get absolutely hosed by conference realignment? It's becoming more and more possible.

Share All sharing options for: Realignment, Again: How USF Could Get Left Behind All By Itself

Here we go again with conference realignment. Are you scared of what's going to happen? Because you should be.

Let's assume Maryland and Rutgers end up in the Big Ten. (Sounds like a pretty safe assumption at this point.) Then UConn goes to the ACC to fill Maryland's spot. (Another decent assumption, since no one is seriously mentioning any other school for that spot.) That leaves only three of the eight Big East teams from 2005-2011 -- Cincinnati, Louisville, and USF.

UL is obviously the most attractive of the three, they just need a conference dance partner. Then, Cincinnati is acceptable across the board -- athletically, academically, market size, right down the road from Louisville. If the Big XII decides it needs to make a move (and they don't really have to, but let's say they decide to expand for the sake of argument) they could easily take those two and call it a day.

That would leave USF as the only school that was in a BCS conference before this year still twisting in the wind. The absolute, unquestionable, worst-case of all worst-case scenarios. You think people are mad at Skip Holtz and Doug Woolard now? Imagine if that scenario goes down, and it very well could. What does USF do then? (After it fires everyone and erases them all from the history books, 1984-style. "Doug Woolard had ceased to exist; he never existed.") Do they suck it up and play with all the rejects? Sign up for MACtion? Shut down football?

And not to pile on, but do you have any faith in this guy knowing how to steer USF to safe harbor right now? I sure don't. 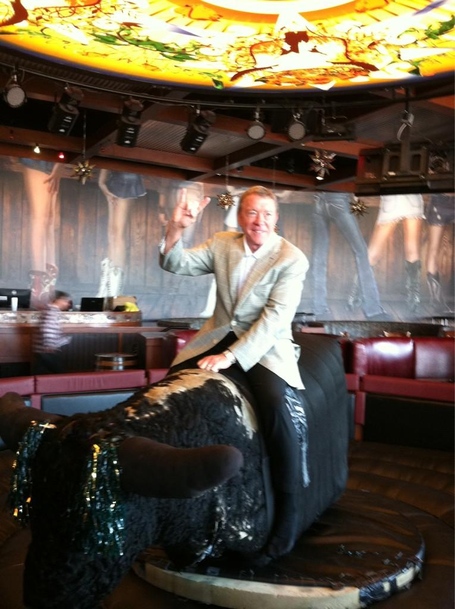 This is the darkest timeline, Bulls fans. Be afraid.