Bulls drop an ugly one at Notre Dame

Share All sharing options for: Bulls drop an ugly one at Notre Dame 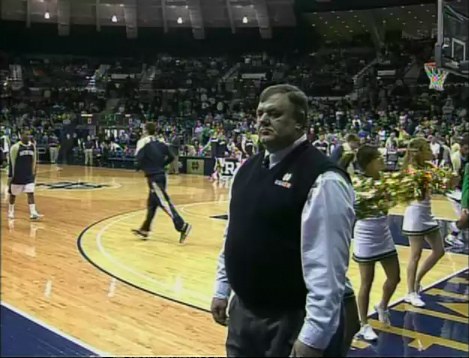 Welcome to Notre Dame. Take your seat and SHUT UP.

The Irish tried to make the game as unappealing and stern as that usher and it pretty much worked.

Notre Dame did everything they could to keep DoJo from going off. By the second half, Tory Jackson was so intent on guarding him that he wasn't even interested in following the ball. The obvious goal was to keep him from getting the ball in anything resembling a scoring area, and it worked well. If he did get the ball, guys like Ben Hansbrough got right up in his face and gave him no time to plan his attack. You saw how important it was to their game plan after Jackson made a tough layup to give the Irish a 60-58 lead with two minutes left, then immediately picked up DoJo 90 feet from the basket after he caught the inbounds pass. It led to Jones pressing, taking several bad shots, going 3-for-17 with everything heavily contested, and only scoring 10 points.

Chris Howard to the rescue. All the attention on DoJo meant they had to forget about someone, and Howard went off for a career-high 23. Even when the Irish were jumping out on ball handlers and trying to keep all those guards out of the paint, Howard found some space and went 9-for-15. And Jarrid Famous cleaned up a lot of messes with six offensive rebounds and 18 points, including a ridiculous follow-up dunk after yet another wild miss by Jones.

Just like the Irish took DoJo out of the game, USF did a fairly good job keeping Luke Harangody out of it. Again Alex Rivas played solid, nothing-to-lose defense on the opponent's premier big man. Actually everyone did a nice job pushing him away from his spots down low and making scoring more difficult. He had to do a lot of his damage at the free throw line. Still, they couldn't keep him off the boards and he ended up with 15. You have to think Gus would have helped them out on that.

But Jackson killed the Bulls in the second half, playing out of his mind. Anthony Crater couldn't slow him from getting inside, and Howard committed an unwise foul in the last minute when the Bulls finally put him on Jackson instead of Crater, leading to a three-point play. There was also quite a bit of confusion on defense on pick-and-roll/screen-and-roll plays. A couple of times the Bulls couldn't decide whether to switch or not and Jackson got right to the basket uncontested.

The Bulls now have an entire week to get ready for a crucial game at Marquette where all signs point to Gus rejoining the team. This is not a particularly good loss for their NCAA tournament hopes, but this is also not the time to go into a tailspin.

- The "o-ver-ra-ted" chant is my least favorite in college basketball and nothing will ever challenge it for the title. But the "left-right-left-right-left-right" chant is definitely in second place. WE GET IT, HE FOULED OUT AND HE HAS TO WALK TO THE BENCH, HA HA HA, YOU'RE SO CLEVER.

- I don't get as worked up about free throws as most people because college teams don't shoot them all that well in general. (The worst NBA free-throw shooting team, the Magic, is at 71.5% this season, and that would still put them in the top third of NCAA teams.) It's not the only reason USF lost. But yeah. 10-for-20, that's not good.