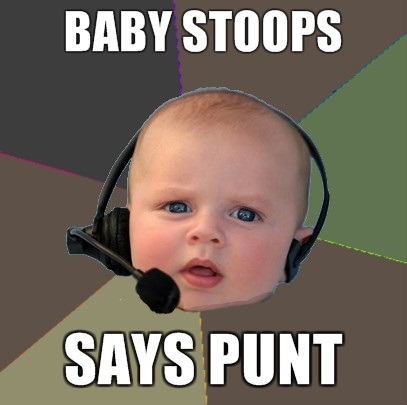 This is how $633 in fake money gets flushed down the drain. Makes you wonder why anyone even tries gambling on college football.

DISCLAIMER: This contest is for entertainment purposes only, thank God. No actual wagering is being performed, thank God.

Here are the standings after Week 8. Kevin keeps his lead, hitting the new high-water mark for anyone this season with his current bankroll. And look at Glaude making a midseason surge!

The complete standings and weekly results are in the Microsoft Excel file linked here. That graph is just fantastic. Every time I see Toro's yellow line plummeting towards the bottom I start laughing. Until I realize my own line is doing the same damn thing.

BEST BET: Ken had a huge week, spurred on by a nice parlay on Thursday night. He took Oregon -25.5 against Neuheisel as well as the over, which Oregon almost covered by themselves. That won $130 in fake money for Ken. We'll cover a couple of his other winning bets in a minute.

WORST BET: You know what? I'm not going to consider the Oklahoma/Missouri bet a bad one. That was the first time Mizzou has actually played well in The Big Game at Home since I can remember. Usually not even Bob Stoops' big-game choke artistry would have been enough to lose in that situation. Then again, Stoops really stepped it down Saturday night. Now it comes out that the reason he punted while down nine with three minutes left, and holding no timeouts, is partly because he was trying to limit the damage and save their BCS standing. Dan Wetzel is probably trying to get his cottage industry book into a second printing as soon as possible so he can get a 7000-word rant in there about that.

Wait, where was I? Oh yeah. There were no bad bets, just bad results. Except for maybe Casual Hoya flying in the face of the Oregon death machine and getting chopped to bits.

MOST DEGENERATE BET: Ken again, who bet on both a MAC game (Temple -7.5 over Buffalo) and a Sun Belt game (Middle Tennessee -12 over UL-Monroe), and hit them both.