All the way back at the beginning of this blog, I remarked how I wouldn't have been able to even attempt doing this three or four years ago. I don't live in Tampa Bay, and up until that point it was nearly impossible to see every USF game, or even most games, unless you lived there. But now with more games on television, and the explosion of streaming content like ESPN 3, you can really be a fan from anywhere.

Another thing that makes it easier to do what I do is high definition. I've complained about some of the earlier games this season not being in HD because when I try to do one of these Film Studies, I lose my ability to read the defense down the field. Having the HD feed gives me those crucial 5-10 extra yards beyond the line of scrimmage -- it can make a huge difference in understanding a play or having to guess at it. Fortunately last Friday's game was in HD, which really helps make this study possible. Otherwise I'd have no idea how the Cincinnati secondary got torched by Faron Hornes for USF's longest play from scrimmage since Carlton Mitchell's 85-yard touchdown against Syracuse last season.

Let's look at this touchdown piece by piece.

Here's the very beginning of the play. USF is in a three-receiver, 1 TE shotgun set, and Cincinnati matches with a nickel defense. I think it's supposed to be a Cover 2 zone blitz, but as you'll see, one of the two doesn't cover. 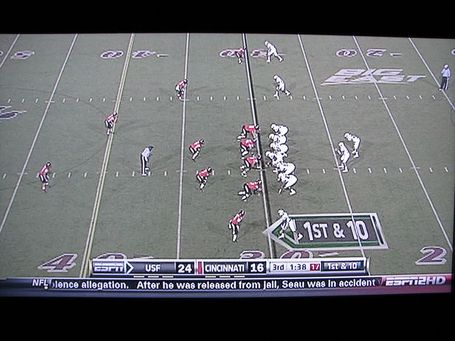 The play starts with a play-action fake to Demetris Murray. The corners stay matched up on the receivers (except for Reuben Johnson at the bottom of the screen, who is blitzing). But strong safety Drew Frey bites hard on the fake. You can already see him running towards the line of scrimmage while the receivers (particularly Hornes, the slot receiver at the top of the screen) is running what will become a flag route in the opposite direction. 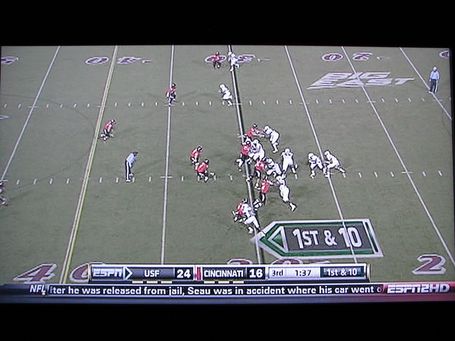 You might also notice cornerback Camerron Cheatham, wearing #20, stop covering Hornes and jump on a hitch route that Evan Landi is running.

If you don't know, the combination of a flag and hitch route by two or more receivers on one side of a formation is called a smash combination. Cornerbacks are taught to cover the hitch route and let the safety behind them cover the flag route, so Cheatham kind of had the right idea. But there are two problems. First, Cheatham is the nickel corner. There's already a defender on Landi to cover the hitch, so Cheatham can stay with Hornes on the flag route. The second problem, as you already know, is that Frey has bought into the play-fake and is completely out of position on Hornes. 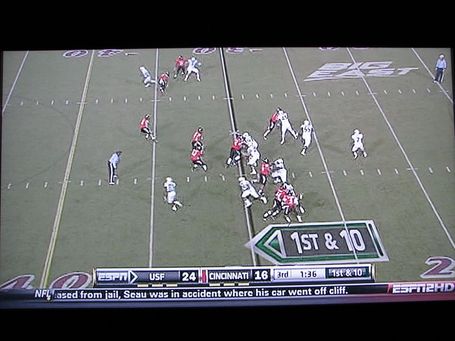 By the time B.J. Daniels is ready to throw, Frey is finally figuring out that it's not a run, and diagonally Hornes is a good 10 yards behind where Frey should have been to help out. 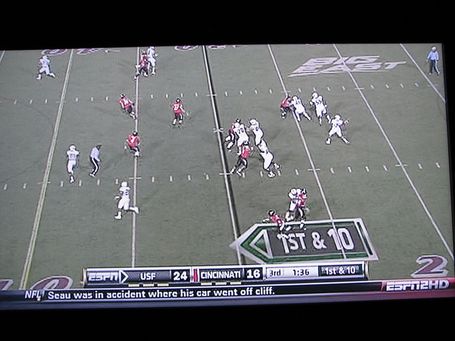 Hornes spins forward to make the catch just beyond midfield and starts running after the catch. Frey runs back to try and make a play, but he overruns Hornes, who cuts back inside and keeps going. 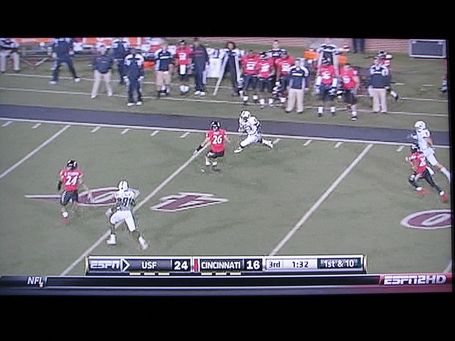 As Hornes works his way down the field, he's being chased by Cheatham and Malik Bomar. It looks like Bomar has the angle... 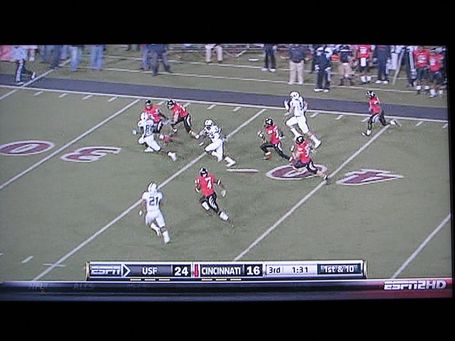 until Murray hustles in and makes a fantastic block to wipe out both defenders. Murray just throws his body in there like he's throwing a check in hockey, or making a screen block in flag football. 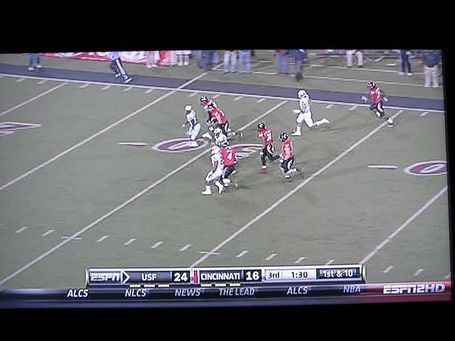 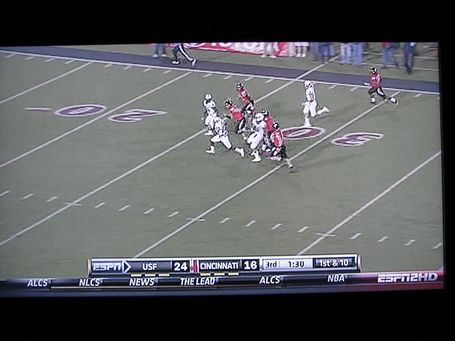 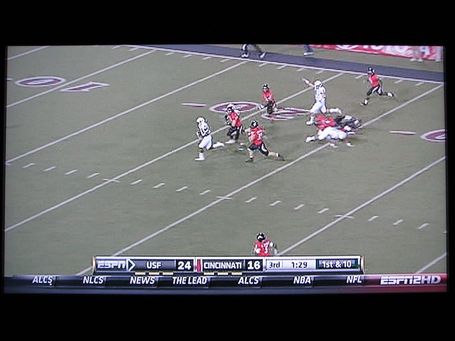 Now Hornes might have a lane to the end zone. But just to make sure he doesn't get chased down, Dontavia Bogan (who started on the opposite end of the field from Hornes) throws another block that takes both Frey and J.K. Schaffer out of the play. 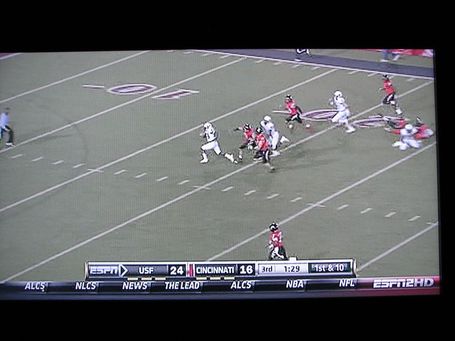 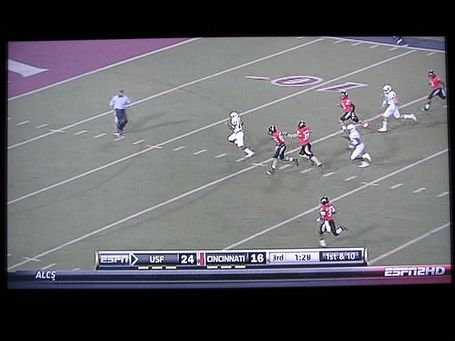 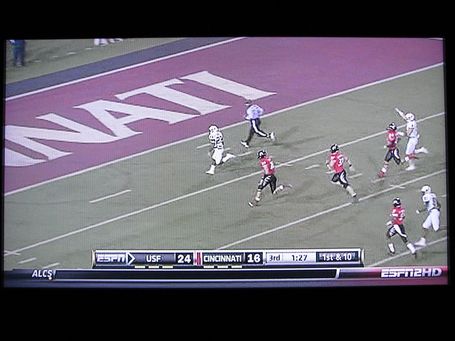 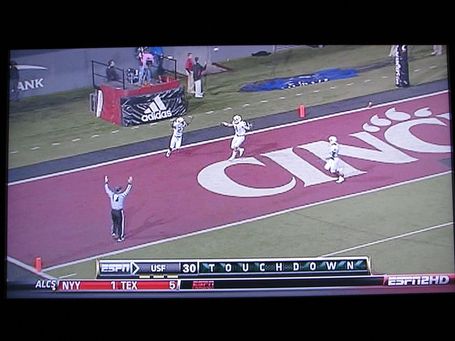 And Butch Jones is not pleased. 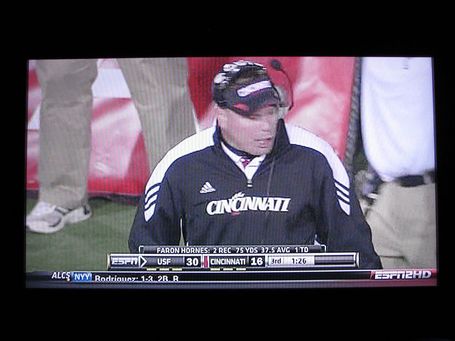