It's amazing how far the technology in football video games has come since I started playing them (CAUTION: ABOUT TO DATE MYSELF) 20 years ago. I still have a working NES and I play Tecmo Super Bowl from time to time, but that isn't quite football... not with only eight plays to choose from, quarterbacks able to throw the ball 90 yards, Bo Jackson running up and down the field like a human bulldozer, and all of that. Things started to improve with the Madden series for Genesis and the Super NES. Now you had dozens of plays to work with on both sides of the ball, you didn't have to cycle through your receivers to throw passes, you could dive and make spin moves and aim kicks, and do more things that were true to life.

Then the PlayStations and Xboxes came along and everything took another huge jump up in realism. Now the lines of distinction between real football and video games have been blurred so much that if you put one of the modern games into your machine, you better know something about football or you're going to get smashed by the CPU. But even if you already know a lot about the game, there are always opportunities to learn even more.

My first introduction to mesh routes was actually from playing NCAA Football 10. Even though I eventually ditched the USF playbook and started using the East Carolina offense, both playbooks had several pass plays in them with these routes. The first time I saw a receiver catch a short pass on that play with no one around him and end up with a 40-yard gain, I was sold. I still work mesh routes in at least a couple times a game, because you set yourself up for a big run after the catch if the defense is in man coverage, and you can still complete them for smaller gains against a zone. As long as you have enough time in the pocket to wait for your receiver to come open, the play is pretty much unstoppable.

Mesh routes are when receivers on opposite ends of the formation run short crossing patterns towards each other. In a zone, the quarterback will have his windows to throw the ball to them (like any pattern run against a zone) or the receivers can stop their routes in the seams and wait for the ball. But against man defense, this can be a big play. The two defenders usually run into one another trying to keep up with their man, and one or both receivers can pop wide open for a good gain. You can also build routes around it to take safeties or the outside linebackers out of the play and give the receiver lots of running room after the catch. These aren't plays you can run all the time, because defenses can eventually figure out where the receivers are going and just wait to deck them and/or intercept the pass. But it's a good play to have in your bag on, like, 3rd and 6.

This is a long way to go to say that Dontavia Bogan and Faron Hornes ran mesh routes to spring Bogan open for USF's second touchdown against Rutgers. But we're here to try and educate, dammit. After the jump, we'll go frame by frame and show you just how it happened.

Here's the formation before the snap. USF used more four- and five-wide sets in this game than they have for most of the season. They're in a trips left shotgun spread, and as you can see, B.J. Daniels is taking a moment to tie his shoe before the play begins. 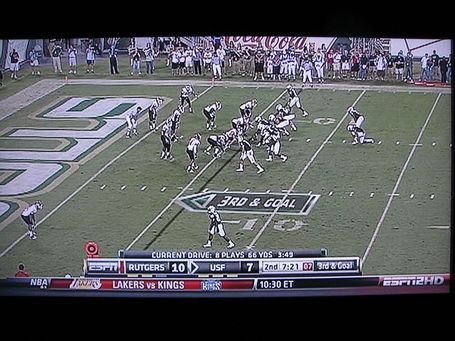 At the snap, Bogan (on the right side of the formation) and Faron Hornes (the inside receiver on the left side, closest to the tackles) each run crossing patterns at about 3 yards, moving towards each other. Rutgers is in man coverage, as you can see cornerback Brandon Bing following Bogan towards the middle. 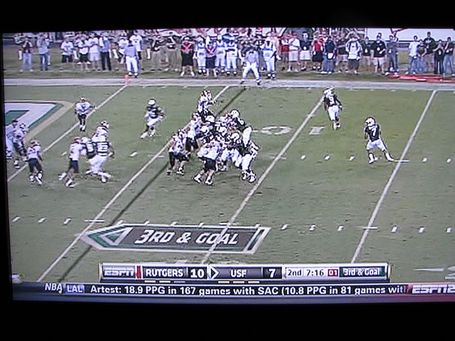 Bing is already being put on the spot here, though, because there's traffic in between him and where he needs to be to play tighter coverage on Bogan. Jonathan Freeny, the defensive end, steps back at the snap as Rutgers brings a blitz from the right side. Either he's playing a zone, or more likely he's acting as a spy on Daniels to prevent him from running for the goal line.

Hornes runs just far enough to get in front of Freeny, then stops his route. It's not exactly a pick, but it does screen Freeny from helping out if he was so inclined. Meanwhile, Bing has to run several yards back to get around the congestion in the middle. Evan Landi's route, a short curl at 8 yards, is not helping because it brings the safeties down in the middle to create even more traffic. 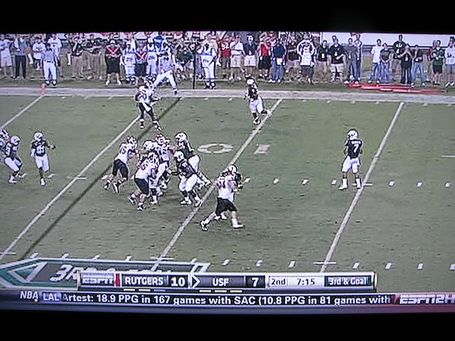 Bogan clears the coverage, and Daniels hits him in stride as Bogan runs away from the defenders. 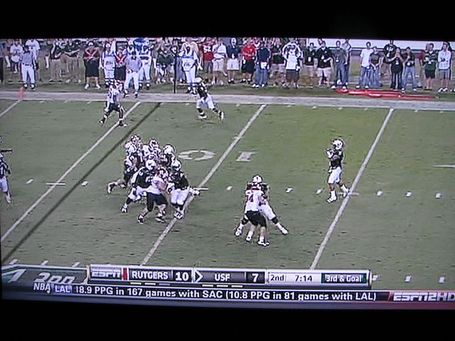 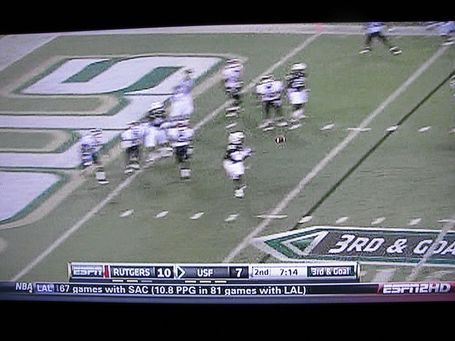 Bing is trying to catch up… 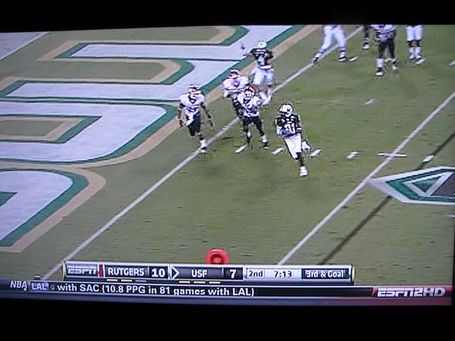 But he can't close the gap and Bogan runs into the end zone for the score. 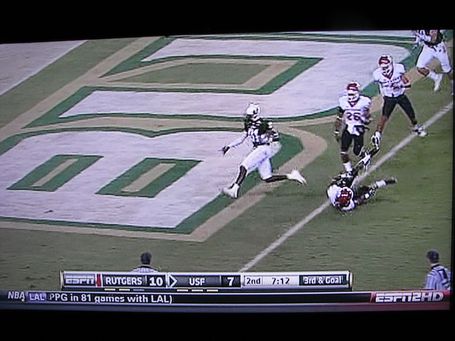 And if you were wondering where the other cornerback (Logan Ryan) was to help out, Stephen Bravo-Brown is standing in the back corner of the end zone distracting him with a decoy route, waiting for Bogan to greet him. 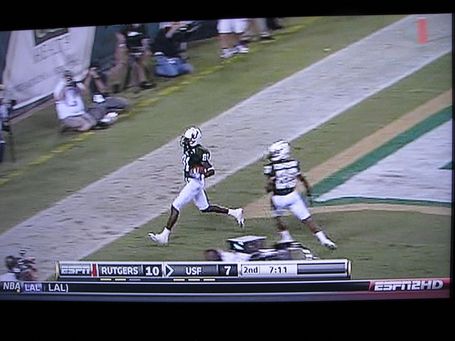