Deja Vu All Over Again: Thinking Through Yet Another Goal-Line Debacle Against UConn

Share All sharing options for: Deja Vu All Over Again: Thinking Through Yet Another Goal-Line Debacle Against UConn

So I kind of lost it on Twitter last night when the game ended. 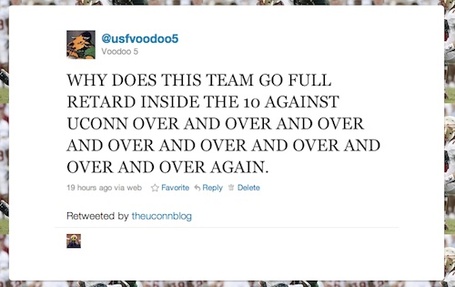 Make that really, really lost it. But could you blame me? USF's lost four times in six games against UConn since the Bulls joined the Big East, and all of them involved some kind of late-game, goal-line screwup or butchering of the clock, or both.

-- 2007: In a 22-15 loss, the Bulls had the ball inside the 5-yard line on three separate occasions and scored a total of three points, including the last drive of the game where they ran some kind of horrible bootleg or something on 3rd and goal from the 1 and Matt Grothe lost 11 yards.

(I didn't see the second half of this game.I was busy getting married at the time. I still haven't watched it. Probably for the best.)

-- 2009: USF scores late to take a 27-26 lead, then stupidly squib kicks with nearly a minute to go in the game and gives UConn enough time to drive into field goal range. Dave Teggart hits a 42-yarder at the buzzer and the Huskies win 29-27.

And then last night.

Skip Holtz came out right after the game and said they should have run the ball on second and third down to take more time off the clock. Well… maybe. Second down, that's fine. You either run another 40 seconds off the clock, or UConn burns a timeout, or you score a touchdown. And then on third down, if you didn't score, you could run again if you were close enough to the goal line, or call a pass, and you'd still have the field goal in your back pocket. Really, whatever strategy USF went with there, I would have had no complaints. Unless they somehow ran the clock out without getting off a field goal (which would have taken clock mismanagement of Andy Reid-ian proportions), they couldn't have screwed that up.

The play-calling… look. I know the statistics on this offense look bad. USF has struggled to put up points. All year long I've felt like the issues have not been with coaching -- they've been bad execution and a lack of elite offensive talent at quarterback and receiver. The Bulls have had to play close to the vest and hope to make just enough plays to win. I hate playing that way and I don't think it pays off in the long run, but right now it's their best option. I hope this establishes me as someone not willing to toss coaches under the bus willy-nilly. On the whole, I think they've done a very good job this year.

But two fades in a row??? Really??? Both to Dontavia Bogan, who is only… let me check this… 6-foot-1? That was just ridiculous. Bogan's been really good this year, but he doesn't have that Huey Whittaker jumping ability. I might even buy a fade to Evan Landi, who is 6'3" and has made several great leaping catches this year. Even that, though, wouldn't make much sense. It doesn't fit the skill set of the quarterback on the field. Bobby Eveld was throwing rockets all night long on the short routes (which makes perfect sense since he was drafted as a baseball catcher). What better place to take advantage of that than around the goal line? A slant, a stick route, an angle route… and even if those break down, Eveld might be able to fit the ball into a tight space in the end zone. Just something where the ball isn't floating in the air begging to be picked off, or sailing over everyone's heads out of bounds. Bogan had no chance to catch either one of those passes. I already hated fade routes before last night, but now more than before.

Yes, it's even worse because the USF defense did everything they needed to do to win the game. Jordan Todman only ran for 93 yards and averaged 2.8 yards per carry. UConn only gained a total of 232 yards and didn't score an offensive touchdown. The Bulls could have managed the Huskies right out of the game at the end, and it didn't happen.