Oh, and don't write about Dojo yet... I'm writing him an open letter as we speak.

Roger that. You guys think 80% is right for the meter now? That's about as high as I'm willing to set it until it's official. 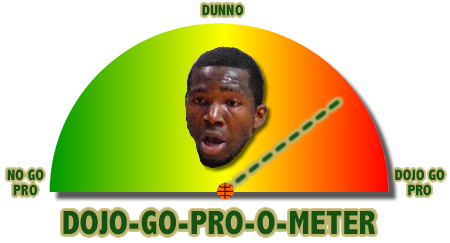 After reading Greg Auman's blog post earlier today, it's more clear than ever to me that DoJo wants to go to the NBA come hell or high water. He must be hearing what he wants to hear, regardless of the implication. Maybe he's happy with the projections. Maybe the NBA is whispering sweet nothings in his ear so he'll come out. Maybe the teams interested in him are running a giant smokescreen. Maybe he's being delusional. Maybe DoJo isn't really concerned with the projections and just wants to start getting paid. Who knows. But as far as this exercise goes, does it matter? Even if people are duping him (which I hope is not the case, and we would have A LOT to say about that if they are), the Meter only cares if DoJo is leaving or not. It's a yes or no question and all signs are pointing to yes.
Here's another thing to consider. Stan Heath only has one scholarship left, or two if DoJo leaves. The spring signing period starts on Wednesday. Have you noticed how many players are still on USF's radar at this point? There are something like five or six guys in play, and the list seems to be constantly growing. I get the feeling that Heath would not be chasing down so many leads at this stage of the game unless he was reasonably sure Jones was gone.