The Most Important Player for USF Basketball - Number 9

Share All sharing options for: The Most Important Player for USF Basketball - Number 9

For those who are new here, I made a countdown in the preseason list of our basketball roster based on their importance to the overall success of the team. Now I'm going back to see how well I did. To recap, here is the countdown so far, with their preseason rank in parenthesis:

And now to today's selection. This shouldn't be much of a surprise, but Number 9 on The Most Important Player for USF Basketball countdown is Alex Rivas! 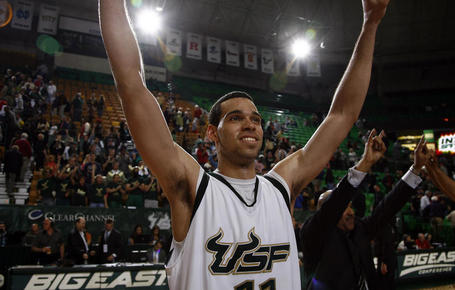 After starting his Junior season at USF limited due to having rod implants into his shins, Alex started coming into his own late in the season, having a monster 18 point 11 rebound game against Seton Hall at the end of the year. Most people including myself thought that Rivas would give Jarrid Famous a tough battle at the 5 this year, and at the very least would provide some quality depth off the bench all season.

Unfortunately, Rivas had to have surgery in September to replace those steel rods in his shins, and the depth concerns in our front line began that instant. Although medically cleared to play in January, Rivas was still a couple of months away from contributing at the level he was at the end of his Junior season. Limited to only 17 games and 5 minutes a contest, Rivas was viewed as a defensive replacement, and held quality bigs like Greg Monroe and Luke Harangody in check when he was out there.

I wish I could have seen a healthy Alex Rivas perform for us for a whole season, because I think he would have been a real defensive stopper for us down in the post, given us a few baskets a night, and provided some quality depth that we've been lacking down in the post for years.

So, readers of V5, who will be Number 8 on the countdown? Your answers are below.