It's kinda funny how things work out these ways. Mike Ford and Jamar Taylor came to USF together as two highest rated players to play at USF, an inside/outside combo that was going to ease the loss of Andre Hall, and both are gone within weeks of each other. Greg Auman has reported that Taylor has left the program, this after being held out of Spring Drills due to academic issues. 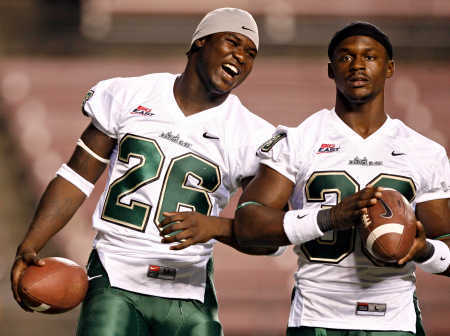 Jamar came to USF after enrolling early at Alabama, due to being homesick/wanting to be with his new family. He scored what turned out to be the winning Touchdown during our famous 2007 win over West Virginia, and he had a fantastic game against Kansas in 2008, running for 72 tough yards and a 15 yard touchdown. Although Jamar showed these flashes of brilliance, he never really came into his own here for a couple of reasons. Coach Franks' reluctance to go with a feature back, and also being injured it seemed every year. In 2008, Taylor was hampered by an ankle injury that limited him for most of the 2nd half of the season. Last year, Jamar was sidelined for almost all of this season due to a sprained knee he injured during a preseason scrimmage in August. Although he came back for the Pitt game, he was rushed back too quickly and was limited to Special Teams duty for the rest of the season.

I liked Jamar, and thought that he could have been The Guy here at USF if things turned out a little different. Hopefully he can latch on somewhere else and he has a chance to prove himself that he can play at the next level