The Most Important Player For USF Basketball - Number 10

Share All sharing options for: The Most Important Player For USF Basketball - Number 10

For those who are new here, I made a countdown in the preseason list of our basketball roster based on their importance to the overall success of the team. Now I'm going back to see how well I did. To recap, here is the countdown so far, with their preseason rank in parenthesis:

And now to today's selection. This shouldn't be much of a surprise, but Number 10 on The Most Important Player for USF Basketball countdown is Shaun Noriega! 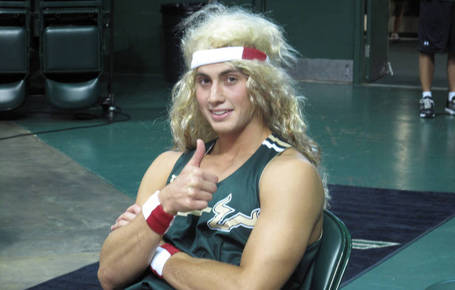 via image.cdnl3.xosnetwork.com ed note: Will I use this picture in the future? The answer is a resounding yes.

Noriega came in at number 8 in the preseason poll in between fellow freshmen Mike Burwell and Jordan Dumars. Shaun played in 20 games this year for the Bulls, averaging 3.4 minutes, .9 of a point and .2 of a rebound a game. Noriega was part of the rotation for most of the non-conference schedule, but he rarely played outside of garbage time once Big East play came around.

The other one was his late three in the Big East tournament vs Georgetown, which turned out to be the only three pointer USF made in the two games.

No one can deny that Shaun has the best shot on the team. People have said that Noriega has the green light from Stan to shoot at any time no matter the situation he is that proficient. He had two things working against him this year though. His defensive abilities weren't up to what Stan needed this year, and that Dominique Jones was in front of him on the depth chart. I'm sure the coaches will get him in the weight room and get him ready for the Big East next year. Should be an interesting battle between Shaun, Burwell, Jawanza Poland, and Hugh Robertson for the 2 and 3 positions next year.

Now readers of V5. who should be Number 9 on the countdown? Your answers are below.