It's unfortunate that Ben Moffitt ended up being remembered just as much for what happened immediately after his college career ended as he was for what he accomplished on the field. Following a redshirt year and a few games as a backup his freshman year, Moffitt took over the starting middle linebacker job in 2004 and never gave it up. He started 43 straight games and became the heart and soul of the USF defense.

Playing the most demanding position on the field in Wally Burnham's scheme, Moffitt led the team in tackles in 2005 and 2006, and finished second to Tyrone McKenzie in 2007. In total, he recorded 335 tackles, second most in USF history, and 41 tackles for loss. He also forced five fumbles, recovered five others, and all of his four career interceptions came in 2007, when he was named to the All-BIG EAST first team. He was twice named a national player of the week - once for a 14-tackle effort in the blowout upset of Louisville in 2005, a game in which he also recorded a sack, a forced fumble, and a recovered fumble.

The other one came in the biggest game he ever played in. You can read all about that game after the jump. 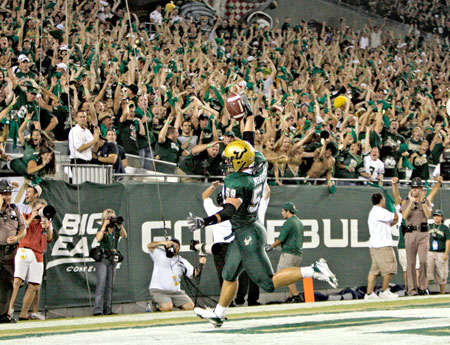 You can't talk about Ben Moffitt's impact on the field without talking about the game against West Virginia in 2007. We had never had anything close to a game of this magnitude before, and certainly not at home. The first quarter lacked style and structure, but not intensity, as both defenses took turns laying hits on each other and forcing turnovers. It was a 0-0 standoff as the quarter wound down, and the fans were starting to lose a little bit of the hysteria that had been established long before the opening kickoff. Something needed to happen.

The Mountaineers had a 3rd and 7 at their own 28. Pat White dropped back to pass. Moffitt hid behind a West Virginia offensive lineman who had no one to block, spying in case White took off running, and daring him to dump the ball off to Owen Schmitt over the middle. White took the bait and threw for Schmitt as Jarrett Buie hit him. The ball wobbled a little bit, and Moffitt intercepted the pass and ran it back for a touchdown.

That had to be the loudest moment in the history of Raymond James Stadium -- louder than any Bucs crowd has ever been that I can remember. It turned the place into a complete madhouse again, and the noise didn't subside for the rest of the game. More importantly, that touchdown helped calm the Bulls offense down. They stopped turning the ball over, while the Mountaineers did not. It was a real roller coaster of a game to watch, because West Virginia was threatening to score seemingly the entire night. But every time they looked like they might score, they either shot themselves in the foot, or USF forced another takeaway.

(Side note: I'm not a very calm person when I watch USF games, especially when there's anything -- and I mean anything -- on the line. I watched this game in my old apartment, a few weeks before I got married, and I'm surprised Mrs. Voodoo still went through with it after my three-plus-hour exhibition of yelling and stomping and pacing nervously around the bedroom and hallway. The game probably took a year or two off my life and untold numbers of hairs off my head.)

Moffitt had a hand in two more interceptions. Late in the third quarter, after Pat White had again failed to make it through an entire game against USF without getting hurt, Moffitt blitzed backup QB Jarrett Brown when West Virginia was threatening to score. Brown threw an absolute howler of a pass off his back foot, and Nate Allen had an easy interception in the end zone. On the Mountaineers' next possession, Moffitt was there to haul in another pick after Jerome Murphy punched the ball away from Steve Slaton.

And no one remembers this, but Moffitt should have had the hat trick interception and in all likelihood another touchdown. With seven minutes left and WVU down 21-6, Brown threw another terrible pass that hit Moffitt right in the hands. He had tons of open space and could have gone coast to coast to ice the game right there. But the ball dribbled away and hit the ground. The Mountaineers ultimately scored a touchdown on that drive -- a 14-point swing -- and the game came down to the last possession before the Bulls prevailed.