Where Will DoJo Go?

Share All sharing options for: Where Will DoJo Go?

Voodoo did a nice job with the logo. Thought I should throw that in there.
There has been a lot of news on Dominique Jones since the last time we checked in on him, so let's get right into it.
- Dominique was in New York on Friday to work out with the Knicks along with combo guards Willie Warren, Greivis Vasquez, and Kutztown's finest Stephen Dennis, our Knicks site Posting and Toasting reported. P&T also did a scouting report on Jones as well last month, and you can find it here.
- Although there is nothing on how the Knicks practice went, Jones' next stop in Milwaukee with the Bucks yesterday has plenty of quotes for us to check out. First off, let's go to our Bucks blog Brew Hoop to see what Director of Scouting Billy McKinney had to say about DoJo.

"(He’s) strong, very good on the ball defender, he’s an excellent on the ball defender. As we watched him in the workouts, in the respective workouts in Minnesota as well as here, you can see that, in addition to his defense, another thing he does well is he’s a pretty good playmaker. He gets to the basket, I think that’s his strong suit right now, being able to beat the defense and get into the paint. His shooting, he shot the ball very well in his workouts. That was a question that I had personally during the year, how well he could shoot the basketball, but he really shot the ball well in his individual workouts." 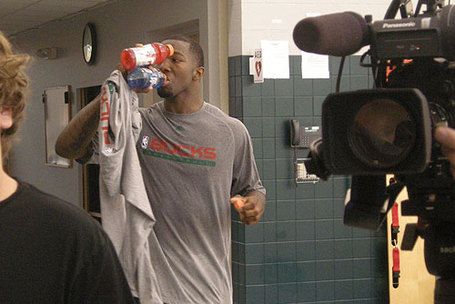 Jones likes his Gatorade via www.nba.com

Greg Auman also has some great stuff following the Milwaukee workout, including an interview following the workout. One quote from him asking what his schedule looked like shows he still has a lot of work to do before the NBA Draft in 3 weeks.

"I just looked at my schedule and I had eight, this was my eighth one, not including the Chicago combine and I have 10 more to go. I wish the draft was tonight because it’s just traveling, traveling, traveling. I was looking at my schedule and one time, I had four in a row (and was in) four different cities in a row. But if it was easy, everybody would do it and you just have to deal with it. The fun part is just getting out on the court. You’re from hotel, to airplane, to cab, to wherever you’re from, but once you finally get on the court, you’re like OK finally, this is my free time, my time to do what I do best."

- Jones is heading back up to the Metro area Friday, as he is working out for the Nets Friday. Nothing else that I can see on potential workout locations, but he has 9 other stops to make, so I'm sure we know where he will be next soon enough.
- Draft Express has their positional rankings out, and Dominique comes in as the 3rd best Shooting/Combo guard, right behind Ohio State's Evan Turner and Memphis' Elliot Williams.
- Alex Kennedy from Hoops World had a couple of interesting things on his Twitter feed today. He first said that Chicago is high on Jones, and might pick him up with the 17th pick. He also tipped off that the Celtics, Magic, and Spurs were in love with Jones as well.

Onto the Mocks!
- First up this week comes from our NBA Draft blog Ridiculous Upside, where they have Jones going to Detroit with the 36th pick. This is right around where Scott had him last time, so not much of a change.
- Draft Express has Jones going up to Memphis with the 28th pick. He'd have to compete for minutes with guys like OJ Mayo, Mike Conley, and Lester Hudson, but I like that he'd be with a young core of players making their way up the Western Conference.
- NBADraft.net has Dominique going to the Nets with the first pick of the 2nd round. Like we've said before, with a team that played as poorly as the Nets did, there will be some minutes for Jones.
- NBA Draft Depot has Jones squeaking into a guaranteed contract with the Wizards at number 30. I know the Bullets Forever guys are fond of him, so that's always a plus.
Walter Football has a mock of their own, and they have Jones going to the Hawks at 24. They also think Jones will be a Roger Mason type, which may or may not be a good thing.
That's it for this week. If you guys see anything interesting on Jones or anything USF related, throw up a FanShot or a FanPost. If we like it enough, we will put it on the front page for everyone to see.