Best of the Bull-ogosphere May 29-June 4

Share All sharing options for: Best of the Bull-ogosphere May 29-June 4

With all the conference hoopla, there has actually been a decent amount of USF related news now that we are officially in the offseason. Here is the stuff we haven't gotten to this week.

- Congrats to Matt Grothe, who just signed with the UFL's Florida Tuskers yesterday. Grothe's rights are held by the Toronto Argonauts in the CFL, but I like that Matt is staying close to home, and apparently so does he. The Lakeland Ledger spoke with Matt late last night, and Grothe had this to say about playing an hour away from home:

"It's like high school all over again. Everybody that I've known growing up can come and watch me play and hopefully (I'll) start a fan base in Orlando."

I was looking forward to buying a Grothe jersey wherever he went. After taking a look at what the Tuskers wore last season, I'm going to pass. The Tuskers are continuing a horrible tradition of crappy uniforms for Orlando based teams.

- Greg Auman is reporting that Florida A&M will most likely be the Bulls season opener for the 2011 season. Greg did point out when FAMU came down to Tampa, over 45,000 people came to watch the game, which was the 2nd highest attended USF home game at the time. I wouldn't be surprised if Ray Jay sells out next year if the game is a go, which would be helped out just a tiny bit by the FAMU band.

- The offseason means transfers, and USF has a pair of former Bay Area kids wanting to come home. First off is Notre Dame safety Spencer Boyd, who is high on the Bulls and will meet with the coaching staff, Greg Auman reports. Only at South Bend for a semester, the Cape Coral native would have a chance to apply for a hardship waiver due to an illness in the family. USF has been very successful in being granted waivers by the NCAA, so if Boyd does come to Tampa, expect him to suit up for the Bulls this fall. After the break is a highlight real from Boyd's junior year at Cape Coral.

- Another possible transfer is Auburn and former Chamberlain High School running back Dontaye Aycock, who is very interested in the Bulls, but so far hasn't heard anything yet from Coach Holtz. Aycock was reportedly dismissed from Auburn due to a violation of team rules, but Dontaye isn't aware of breaking any rules according to Greg Auman. With the amount of running backs the Bulls have coming in, I just don't know where we would have a spot for Aycock. Dontaye has been contacted by Coffeyville Junior College and Mississippi Valley State, where former USF safety Charlton Sinclair is possibly heading, but we will see.

- Some great stuff in Greg Auman's chat yesterday. You can get the full transcript here, but it looks like NC State wide receiver Donald Bowens will be coming to USF pending admission into grad school at USF.

- Your USF related YouTube of the Week brought to you by Matt Grothe:

With Father's Day coming up, the GoUSFBulls photo store is offering up a deal for Bulls fans. Click here for details, but look at the possibilities. 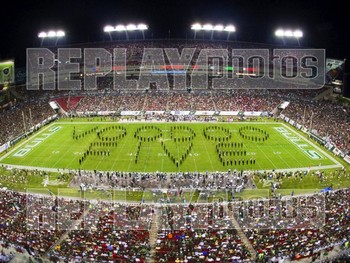 - Congrats to former USF announcer Joel Godett, who is now the voice for the Bradenton Marauders. We enjoyed his work calling baseball and women's basketball games, as well as hosting the USF Magazine on 1010 Sports.

- Also congrats to former USF soccer player Neven Subotic, who made the final 23-man squad for the Serbian National Team in next week's World Cup in South Africa. Best of luck to Neven, but with a possible Round of 16 match with the US, we hope he and the Serbs only do so well.

That's it for this week. Like always, if you see something interesting, throw up a FanPost or a FanShot over to the right, or email us. Have a good weekend everyone.