Show Me Something: Jacquian Williams

Share All sharing options for: Show Me Something: Jacquian Williams

(Editor's note: This is another in my occasional series on players who I will be especially interested to see in action this season.)

Honestly, I could have put Mistral Raymond or Jerrell Young in here along with Jacquian Williams, because all of them are going to have vital roles in defensive coordinator Mark Snyder's 4-3 under defense. I think this is the first time USF has ever had a base defense other than the standard 4-3, so it's worth covering the 4-3 under in some detail.

The 4-3 under defense brings the strong-side linebacker (currently Williams) down to the line of scrimmage any time a tight end is in the game, giving you essentially a five-man defensive front. The SLB lines up outside the tight end, while the rest of the defensive line moves down towards the weak side of the formation. The other two linebackers also shift over towards the strong side. 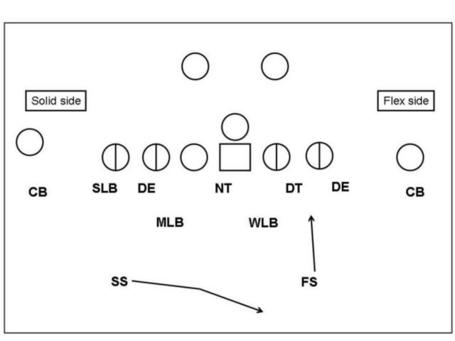 For a complete dissertation on how the 4-3 under defense works, I'll direct you to this post from Trojan Football Analysis - it includes an excellent presentation from Pete Carroll, who ran the 4-3 under defense at USC. To make a long story short, the defense is designed to help stop the run and free up your weak side defensive end (currently Craig Marshall) to rush the passer with mostly one-on-one matchups. Your other two linebackers have simpler lanes to the ball carrier, and you can bring the free safety (currently Raymond) into the box to protect against weak-side runs or to pick up slot receivers. Then your corners typically either man up with one or both safeties over the top, or they drop back along with one of the safeties into a cover 3 zone.

The 4-3 under will probably be the counter to teams like Rutgers, Connecticut, and Pittsburgh, who tend towards pro-style formations and power running. (These teams just so happen to be the ones that USF has traditionally had the most trouble against.) And that's going to put a lot of pressure on Williams. He'll have to make plays in run support and contain. The SLB simply cannot be taken out of the play in this defensive scheme, or you'll give up big gains on the ground. Williams will also have to be ready to cover the tight end when they go out for a pass. Third downs are going to be a big challenge with these teams that set themselves up for manageable third-down conversions.

It's a difficult assignment, especially because he's not the ideal size to be playing a strong-side linebacker in this scheme at only 222 pounds. Williams does have a lot of speed, though, and I would guess that the coaches are hoping that he's fast enough to overcome his relatively small size. It will be something to keep a close eye on, because how well Williams can adapt may determine how successful USF's defense is this season.