Best of the Bull-ogosphere July 27-August 2

Share All sharing options for: Best of the Bull-ogosphere July 27-August 2

Once again, there was a lot out there that we didn't get to last week, so here is the best of the rest.

Before we start, I'd like to say that the best shoes in the universe go to Twitter user @McIntyre2K7. 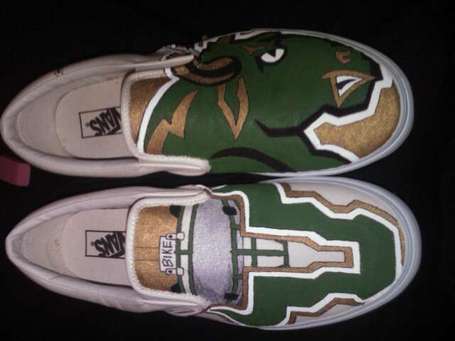 I want to buy 5 pairs of these. Also note the green facemask and the correct gold on the helmet. Just throwing it out there.

- Congrats to Jason Pierre-Paul for signing his rookie contract with the New York Giants over the weekend. 20 million dollars over 5 years with $11.6 million guaranteed is amazing. Just remember to send all donations to USF Athletics, Jason. They are tax deductible. If you want to keep up on the latest happenings with JPP and the Giants, make sure you visit our sister site Big Blue View. Ed and the guys over there do a fantastic job covering the Giants.

- Tyrone McKenzie is already making a name for himself in Patriots camp after missing all of last year due to a torn ACL. T-Mac's demolishing of Laurance Maroney is making waves around the Boston media, and some are calling for him to start at ILB for the Pats this season. I'm always looking to buy USF gear with my favorite pro teams, so don't be surprised if you see me in a number 53 Patriots jersey this year.

- Looks like Ron Anderson Jr. is taking over the leadership reins with the USF Basketball team as they prepare for the FIBA Pan-American University Games in Brazil. Greg Auman has a feature on Ron here, and Scott Carter has a great story about the trip here.

Your USF related YouTube of the week. You guys want to watch the Red's old dugout fall to the ground?

- GA is reporting that senior wide receiver Ed Alcin will be transferring to Division II school Fort Hays State. I thought with injuries to A.J. Love and Sterling Griffin, along with Carlton Mitchell leaving early, that guys like Alcin might be able to crack the rotation this season. Although he never did much in a USF uniform, I wish him the best and hope he does well at Fort Hays.

- Scott Carter has his AP and Big East ballots out, and I'm a little surprised that he has UConn winning the whole thing and USF down in 6th place. I know this is a transition year for the Bulls, but it looks like UConn is the new USF when it comes to trendy picks. Greg also has his Big East ballot up, and he has Pitt winning the league, with USF finishing in 4th.

- Finally Sean at TNIAAM has Sampson Genus going 2nd in the Big East clambake during Media Days. I like Sampson's chances to take over the clambake's unofficial record of 9. I can eat 9 lobsters at once, and my little brother ate 13 in one sitting before passing out in some clam chowder.