Groupon is a Web site where people can get special deals on things to do in their area - but only if enough people want to take advantage of it. The offer on Groupon Tampa on Wednesday was for USF football season tickets, and individual tickets to the Western Kentucky and FAU games. (Greg Auman noticed it earlier, and Toro got one of these e-mails in his inbox.)

Great idea by the sales and marketing department to push the single-game tickets. Those games aren't as easy to sell as, say, tickets to the Pittsburgh game, so any way to help get fans out there to see the Bulls play is a good one. And it worked - almost 800 people took advantage of the offer before it expired at midnight.

But I'm going to guess that no one took a look at the typically weird things Groupon writes for their deals, because What. The. Hell. Is. This. (Click on the image for a larger image of the ad. I did that just in case the Web page disappeared.)

In the animal kingdom, football is played with cheetah running backs, buffalo lineman, and a seagull that is forced to curl up and act as the ball.

Wait a minute. Humans are in the animal kingdom. (Finally AP biology pays off!) I don't remember seeing anything like this at USF games.

Catch humanity's version of the animals' gridiron gallantry with today's Groupon for single game or season tickets for the University of South Florida football team.

OK, sounds good. At least they wrote their way out of that Mutual of Omaha's Wild Kingdom intro. The next part of the ad tells you what tickets you can get and for how much. We're still fine. Then they get into the attractions of USF games at Raymond James Stadium, and finally this.

The season pass, which is good for all seven regular home games against teams such as Connecticut, Syracuse, and the Tuscaloosa Technical Institute of Poetry

Wait, who's that last one again?

the Tuscaloosa Technical Institute of Poetry

That can't be right. They must have meant Rutgers or Pittsburgh.

the Tuscaloosa Technical Institute of Poetry

Sure, you might think they made that one up. But it's actually a real school and everything! Here, I found a picture of the campus!

A WORD is dead
When it is said,
Some say.
I say it just
Begins to
WOOOOOOOOOOO BAMA ROLL TIDE!!!!!!!!

This year's roster is led by wide receiver Dontavia Bogan, running back Moise Plancher, and quarterback B.J. Daniels, whose ability to pass, run, and levitate has put him on the short list for Big East Player of the Year.

Well hell, if Daniels can levitate, then why doesn't he just fly over everyone to the end zone? 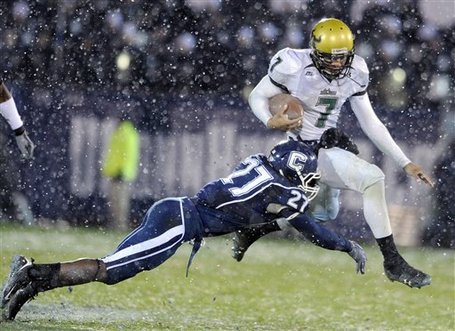 NOT GOOD ENOUGH B.J., YOU ONLY FLEW FOR THREE YARDS THAT TIME.

I knew USF didn't write this drivel, but I couldn't figure out who did. People from a country where they don't speak English? A random word generator? A bunch of people on shrooms? Then I got to the bottom and found this.

Here are my feelings, Groupon. You helped my alma mater sell a bunch of football tickets, which is great. And all it cost us was a pile of embarrassment (fresh on the heels of the "South Flordia" hoodie incident) and people thinking we may have actually scheduled the Tuscaloosa Technical Institute of God Damn Poetry. So... thanks, I guess?