Martin Fennelly's High Horse Is Higher Than Yours

Share All sharing options for: Martin Fennelly's High Horse Is Higher Than Yours

(EDITOR'S NOTE: Don't worry, we're not about to go Fire Joe Morgan on everyone. This is a special occasion because it's rare that you find a bad column that actually gets worse with repeated readings. It was like peeling a suck onion.)

This column actually ran in yesterday's Tampa Tribune, but just because Martin Fennelly wrote it in about 30 minutes doesn't mean we have to tear into it that fast.

It doesn't even make it past the headline before the jackassery begins.

"Leavitt Can Finally Move On; We Already Did"

But first, we have to wait for you to write a smug, self-serving column about it. Off you go, then.

He will be back on the football sidelines soon enough if someone will have him.

It probably should be that way. This is America. A man has a right.

Oh, this isn't the first time he'll tell us this is America, because "this is America" is the perfect lazy explanation for why things you don't want to happen will happen. He might even put another sentence in the paragraph where he reminds us that this is America. Or he might not. Cliffhanger!

Isn't that what Thomas Jefferson wrote, you know, right after John Adams choked him?

We thought it was more of a slap than a choke, but hey, gotta make it sound worse so we can sell newspapers here. (In the case of the Tribune, maybe more like not sell them. But you get the point.)

The saga of Jim Leavitt and the University of South Florida is officially at an end, if you care anymore. I know I don't.

Except for, you know, the part where you throw together another one of your patented drive-by shooting columns to prove how much you don't care.

Hide Dorothy and her little dog, too - he might be heading back to Kansas, specifically Kansas State.

Oh, a Wizard of Oz reference! Didn't see that one coming! And we'd make a Michael Vick joke, but... well, you'll see.

No one said this guy was never supposed to work again in coaching.

Frankly, this Leavitt stuff, I don't think many people around here care anymore about the guy.

Except you, since this is the second time you've said you don't care or that other people don't care. (Three if you count the headline.)

More on this later.

I certainly don't care where Leavitt lands, or if he lands at all. He's set for life financially, has a wife and a young baby and, well, good health and long life to them. No hard feelings.

That's three times you've said you don't care or that other people don't care, and we're not even halfway through this thing. You're a terrible liar, Martin. But hey, no hard feelings.

I'd be glad to write about him in his new job - if he said he regretted even one of his actions at USF.

You don't care, but you basically want an apology? For what? What did he personally do to you? But hey, no hard feelings. Oh yeah: Lord Jim??

I'm not saying USF got it all right in bringing him down. There were holes in that investigation. As early as the day he was fired, we thought Leavitt would get more than the chump change USF originally wanted to hand him when the university dumped him.

Is it "we" or "I"? And you really think Leavitt was lying, then how the hell did he get all that money in a settlement? USF would have steamrolled him in court, right? Tell us about these holes in the investigation! Justify this, damn you!

For a while, I though maybe it would be a job in the NFL.

Boy, I would have liked to have seen him try and choke somebody there.

But hey, no hard feelings.

Maybe Jon Gruden will hire him. They wouldn't coach, they'd just sit in a room all day and watch film.

Look everyone, it's another Tampa Bay coach that Fennelly pulled his two-faced backstabbing bit on!

Snyder was also the boss of Mark Mangino, who later went on to Coach of the Year honors at Kansas, which later fired Mangino amid accusations of mistreating players. He got a fat settlement, too.

So nutty! We're surprised Fennelly didn't work in a Westboro Baptist reference while he was at it. They're crazy just like Leavitt and Snyder and Mangino!

USF once made that hire, and Leavitt was the man who did a lot of that building.

It was a great story, until Leavitt thought he was bigger than the program.

Wait, what was that quote about Skip Holtz earlier? "USF football is Skip Holtz"? So you're making Holtz at least as big as the program in the same column where you're claiming Leavitt thought he was bigger than it.

But if Michael Vick can be chucking a football around the NFL, then Jim Leavitt should be able to find a job in football.

Like that's changed from the beginning of the column. Yes, it's still America. And what's more, you're three words closer to the end of your miserable little rant!

Would you like to go over the list of guys who are coaching? What do you think they are, a choir of angels?

You mean, like you? Or do you just compare coaches to choirs of angels when they stop interesting you and/or let you down? (Emphasis on "you" since you so dearly want to speak for all of us, even though you keep putting "I" in your column instead of "we".)

Pay the man, USF, and learn from it.

Pay the man? Who are you, Teddy KGB?

I'm not sure Jim Leavitt ever will.

Now, we don't just pick fights with those we don't agree with for fun. We can have respectful disagreement, like with this editorial in today's St. Petersburg Times.

They want full transparency when legal action is brought against the institution, but we think that leaves the University much more liable to future lawsuits. If you can't negotiate behind closed doors, it weakens USF's position when it is sued in the future because you're taking the settlement option away from them. Sometimes you need discretion in these proceedings, and we think this is one of those times.

Besides, this report was the University's own investigation of the incident, and that became public record when Leavitt was terminated. You can agree or disagree with the actions taken, as well as the strength of the arguments made, but you can't say these things weren't done in the light of day. Actually, they were too open because someone royally screwed up and failed to correctly black out the names of the student-athletes that were interviewed and promised privacy. And that's a lawsuit that quite frankly we're still surprised has never come to fruition.

On the other hand, if you write a terrible column filled with fake moral outrage and repeated assertions that you don't care even though you clearly do, and you're even confused about whether or not you're speaking for anyone other than yourself... well, then this happens.

Now it's time for the word/paragraph count that is a staple of any "analysis" of a Martin Fennelly "column". See, Fennelly has terminal one-sentence-paragraph disease. We're sure he thinks it makes him sound hip and modern and fresh, but it really makes him sound like a hack who knows how to consume the maximum amount of newsprint with the minimum amount of content. 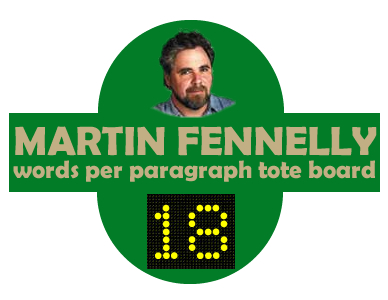 You'll notice there's only room for two digits on the tote board, because the day Fennelly writes a column with full paragraphs like a normal person is the day the earth splits open and swallows us all whole.

Congratulations, Martin! We're only 13 days into 2011, but you've already sent a strong message that Mike Bianchi's long-running claim to being the worst sports columnist in Florida will finally have a legitimate challenger this year. Now all you have to do is start grandstanding about Cam Newton with his Heisman ballot, or compare college football conferences to civil rights or women's suffrage, and you'll be right in the running.