The Staff Discusses UCF's Near-Inevitable Big East Invitation Amongst Themselves

Share All sharing options for: The Staff Discusses UCF's Near-Inevitable Big East Invitation Amongst Themselves

I don't know what's going on here. Maybe I'm feeling charitable towards my fellow man again, since I can't even hold a proper grudge against Rutgers. Or maybe I'm just realistic enough to see what's happening in front of me. And what's happening is that UCF is probably going to be invited to join the Big East in a few months, because I don't think Villanova is going to move up to FBS competition. They have a ton of athletic momentum in their corner this season, and everyone in the media seems convinced they are at the top of the Big East's list if Villanova decides to stay in FCS football.

(By the way, after watching Villanova's FCS semifinal game, I'd just like to say screw Eastern Washington's blood-red, do-not-adjust-your-set field. If they played football in "Blade Runner", that's the field I think they would have played on. And there would be about 75 corporate logos plastered all over the turf. But I'm getting off track here.)

It doesn't bother you that much because TCU is already in. The main team we wanted is in, and anyone else coming in is fine with me. If it was Villanova and UCF being invited, you'd be throwing chairs and blacking out after drinking a six-pack of Four Loko.

If UCF comes in as the 10th team that's fine. I'd still prefer Villanova just for the fact that they already are in the Big East, but it looks like UCF is going to get the invite if Nova declines.

I don't think that's it. I mean, yeah, I'm getting TCU season tickets when they join the league so I can watch everyone else play. But there's something else.

Is it that they're actually legitimately good at sports? Their football team is... well I don't know if they're truly good because they're in such a crummy league, but they did win that crummy league. And there's no question they have a better basketball team than we do. (Although if we had A.J. Rompza and they didn't, I bet the script gets flipped. And not to get off topic again, but they're the reason I won't accept the "you can't win at USF" argument. We really need to get our shit together.)

Anyone know how to get a copy of a UCF annual report for athletics? My basic bone of contention is that the hoops game Ken and I went to had a LOT of empty suites. And as we all know, USF is their Super Bowl. If they're not filling the good seats when they play us... when are they? Or are all of those not leased yet?? If so, obviously I still have debt service questions.

Their attendance at the C-USA Championship Game was pretty crappy as well.

I know their return argument is "we'll fill it for BCS and Big East basketball," and that may be right. But I don't trust anything that comes out of their mouths over there for a litany of reasons.

I think that's what really bothers me. It's how cynical they are as an institution. No one will care if we're in debt up to our eyeballs and we make our students pay through the nose for athletics fees... we have a stadium! And sure it's a gigantic high school stadium, but WHERE'S YOUR STADIUM HUH??? And 100,000 students? We see no problem with this!! And we have a medical school! It's not fully accredited but hey, we have one!

(Side note: I think USF also has too many students, but at least Judy had the good sense not to let enrollment get any bigger.)

(Other side note: I would trade basketball arenas with them in a second, although I may change my mind post-Sun Dome renovation.)

You mean that funding your athletic facilities through improper channels is against the rules?

Voodoo, I think you're secretly excited for UCF to jump aboard so you can start jabbing at the Knights and throwing this picture in random articles whenever you want. 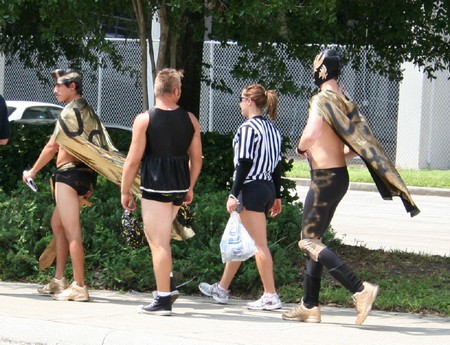 That would be a pretty good bit. I could be talking about soccer or finances or some topic that has nothing to do with sports, and then drop that picture in.

I know their fans fill us all with loathing, but really... West Virginia is already in the Big East. So is Rutgers. We've seen about as bad as it can get. And besides, we run the kind of blog where we're not going to let it be overrun with a lot of stupid things or stupid people. I also think the UCF fans would have a period of time where they're like the dog finally catching the car. They might wonder what to do with themselves once they finally get the object of their desire. It might blunt some of their irrational hatred.

We left off at this point for a few weeks. Then I restarted the chain.

So I thought of another reason why I'm in favor of letting UCF into the league. Our athletic department needs this kind of jolt. Everyone, almost without exception, is coasting right now. Teams, coaches, administrators, fans, everyone. Having to deal with Orlando would snap everyone out of that in a hurry.

God I hate to admit this but I'm starting to think all of you are right. I feel like Strom Thurmond filibustering the Civil Rights Act on this one. I know the world is passing me by, and I should probably let it go.

Things that scare me: Recruiting. Now we're both going after the same kids. And they're going to attempt to put a wall up around Apopka, Boone (Go Braves!!), Dr. Phillips, Evans, Jones, and all the talent in that area all the way out to the Space Coast. If a BCS bid can help them keep these kids at home, they're going to be a force. But I don't think that happens right away.

I think it also means the end of George O'Leary pretty quickly... which is probably a bad thing for us. There's a ceiling on the program with him there. But now there would be sky-high expectations because of the delusion that is their fan base. And he will fail to meet them.

I also think the massive amount of debt they've taken on, combined without much of a donor base, could mean they would be in financial straits pretty quickly. They make take on some new money early, but sustained annual giving and major gifts are what build programs. When they aren't winning immediately (and they won't), I worry they won't be financially competitive.

But they're winning now, and they built the facilities. They're also outdrawing us. Dammit, I think it's time.

At least SCUMBAGS won't come up too.

UCF has done a poor job around the Space Coast with recruiting. They only have three on the roster right now, and there is a perceived slight around the area that O'Leary would rather go out of state than pick up a kid or two from here.

They do look at the bigger schools in Orlando, but they don't even bother at schools like Oak Ridge or Colonial, where there is always a kid or two to take a look at.

If UCF makes the jump, I hope O'Leary sticks around, because some kids will still rather go to USF than the Knights.

My only other misgiving is that adding a fifth BCS school in Florida could theoretically make all of us weaker. UCF would be another school looking for the same kids everyone else is looking for. Who's going to win that tug of war? Or will all of us lose?

I think we're going to find out pretty soon. And I'll probably be OK with it until the minute we finally lose a football game to them.