George Keifer and the USF Men's Soccer team received some great news when the NCAA Tournament bracket was released this afternoon, as they grabbed the 7th overall seed and two guaranteed home games. The Half-Hoops received a bye in the 1st round and will host the winner of the UCF-FGCU game this Sunday at the Corbett Soccer Stadium. Kick-off is slated for 6:00 PM.

The winner of that game will most likely play the 10th overall seed in the University of New Mexico. If USF wins this Sunday, that game will also be held in Tampa.

As soon as there is a bracket available, we will have that over for you guys. Here is the complete bracket: 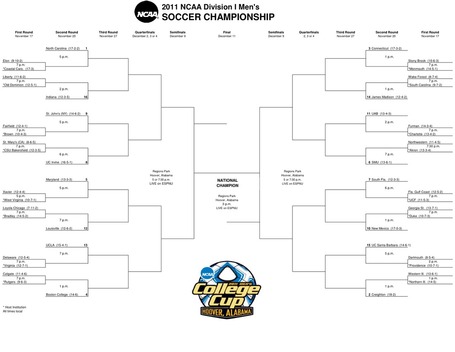 Congrats to the Half-Hoops for a great regular season and here's to a successful run in the College Cup.