We continue on even though these last eight games (and I'm almost certain it will be eight unless you think this team can win a game in the Garden) will be exponentially less fun than the first 24. Not that they were much fun in the first place, but you get my drift.

The two furthest schools from each other in the Big East, geographically speaking, are USF and Marquette. It was the same way when they were both in Conference USA together. Yet the two schools have a surprising amount of basketball history. It started even before the two schools joined the same league, in the 1995 NIT quarterfinals, my earliest memory of Bulls hopes being dashed. In a brutally ugly game at the old MECCA arena, the Bulls lost 57-50 in overtime after Chucky Atkins somehow missed two free throws at the end of regulation with the game tied at 43. Who knows what might have happened to the program if they had made it to New York? (Actually, scratch that. We probably would have just had a couple extra seasons of Bobby Paschal's amazing outfits patrolling the sideline.) 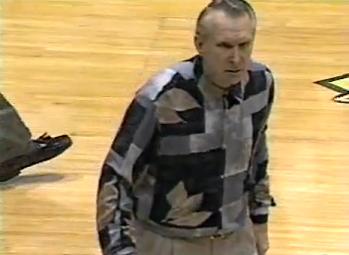 On our podcast with Anonymous Eagle, currently in the editing bay, Ken and Toro brought up the infamous "dog and tree" game from 1997, when former Marquette coach Mike Deane decided that being up 67-33 with 2:33 to play was a great time to call a timeout and hold a teaching moment. (This was the same guy who did this a year later after a last-second win over what turned out to be a mediocre Louisville team, so I guess this should not have been a big surprise.) The year after, the Bulls knocked off the Golden Eagles 57-53 and helped kick Deane out the door.

Then the year after that, in 1999, the Bulls got flat-out Wardled. I was going to do a post about this game because I'm pretty sure I still have a VHS tape of this debacle. But my computer is being repaired and I can't get the video onto my old tower, so I decided to hold off on this until summer story time. Anyway, the gist of it was USF had a 17-point lead with something like 13 minutes to go and then Brian Wardle went off for like a zillion points and the Bulls lost by 1. Wardle is now the head coach at Wisconsin-Green Bay, and I look forward to one of his teams featuring a white guy who just inexplicably scores bunches of points while none of his complete stiff teammates can score more than 6. No, I'm not bitter.

There were some other headache-inducing games in between then and 2009, but the one Bulls fans probably remember most was the 58-57 upset of #9 Marquette two years ago, which was the first win over a top-10 opponent in school history. Dominique Jones ended up winning the game with a crazy three-point play with 15 seconds left, and blue-and-gold-polo-wearing fans still can't understand how Lazar Hayward missed a wide-open putback right before the buzzer that would have saved the game for the Golden Eagles.

So for the bad beats both teams have put on each other over the years, and because we'd rather be miserable about this season than catatonic, today's queefcore anthem is "Pain" by Three Days Grace. Anger and agony are better than misery, and we're sure everyone would agree that you'd rather feel pain than nothing at all.