I don't live in Tampa, so I wasn't able to attend the spring game today. But thanks to USF Athletics and their Bulls Vision streaming video site, available for a mere $10.95/month, I was able to watch all the action and put together a highlight reel in record time! I know they probably don't like me stealing away some of their content, but sometimes you just have to break the rules. Here we go.

Here's defensive end Claude Davis breaking through and tagging Bobby Eveld for a big sack early on. Eveld was shaken up, but returned to the game shortly after. 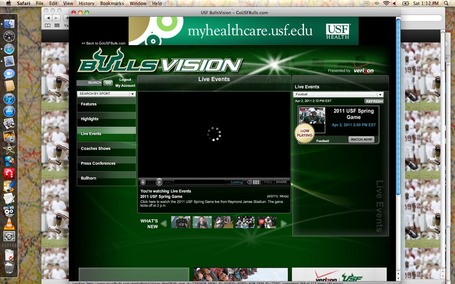 Here's some of the good work by the front seven in slowing down the running game. On this carry, Darrell Scott may have injured himself, because he didn't play again after that. 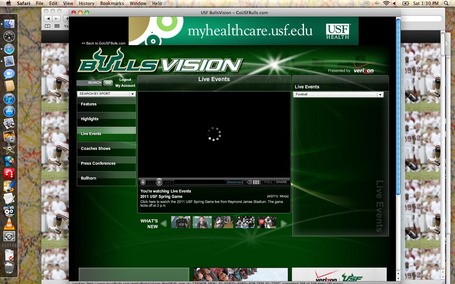 A little later on, Terrence Mitchell had a nifty reverse run for a touchdown, but as you can clearly see on the video replay, a penalty wiped out the score. 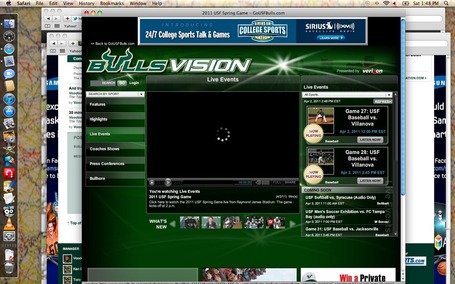 The first two quarters were an offensive struggle, but Maikon Bonani kicked a 31-yard field goal that stood up to give Team USF a 3-0 halftime lead.

More highlights after the jump!

At the start of the second half, B.J. Daniels and the first-team offense finally got a drive together. Daniels capped it off with this 11-yard touchdown pass to Sterling Griffin to extend Team USF's lead to 10-0. 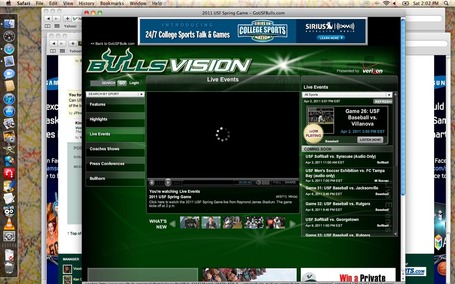 But Team Bulls made things interesting again on the very next play. Matt Floyd, who had the best day out of all three quarterbacks who saw action, hit Derrick Hopkins for this 70-yard touchdown that cut Team USF's lead to 10-7. I was away from my computer when it happened, but fortunately I was able to go back and see the replay thanks to this advanced streaming technology. 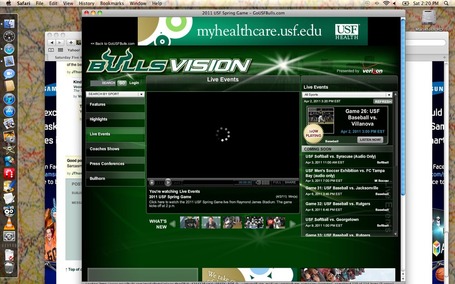 After that outburst, the defenses took over again, and eventually Skip Holtz ended the game with about four minutes left on the clock. Final score: Team USF 10, Team Bulls 7.

(Side note - if you saw the clock in the corner of the screen, I'm in Central Time, so the game started at 1:00 here. And believe me, it wasn't just my computer.)

Look. You can't advertise that your biggest sporting event of the spring is going to be live on your streaming video site, make people pay for a subscription to watch it, and then not have enough capacity to let people see the game. Anyone who would actually pay for this game has to be a pretty hardcore fan. And this is how you treat them? You basically take their money and point and laugh at them while they stare at a blank screen? This is how you treat some of your best fans? Man, you must treat your own employees like gold!

It's bad enough that most of USF's athletic teams range from "average" to "disappointing" to "flat-out terrible". Now you all can't even run a Web site that people are paying to use? (This is hardly the first time Bulls Vision has been a letdown.) What are you all doing? Where's all our money going?