Share All sharing options for: Big East Softball Tournament: USF to Play Louisville in First Round

After the unusual way the regular season ended for USF Softball, the ladies will try to rebound in the Big East Tournament tonight. The Bulls (33-19) will take on the #5 seed and hosts Louisville (34-17) in the nightcap on night one.

Coach Ken Eriksen will be forced to sit this one out, as he was suspended by the NCAA for one game after taking the team off the field against DePaul. Assistant Coach Stacey Heintz will lead the team on tonight.

We will probably see a pair of lefthanders in the circle on Thursday, as the Bulls will send Fr. Sara Nevins (15-7, 1.75 ERA) while the Cardinals will most likely start Jr. Tori Collins (14-9, 2.55 ERA). Collins was a 1st Team All-Big East selection last year, but missed three weeks in the middle of the season with a broken rib. Collins returned in the middle of April against Notre Dame, and has struggled at times, going 2-4 since coming back.

Offensively, the Cardinals are led by Soph. 1B Alicja Wolny (.386 AVG/4 HR/37 RBI) and Sr. 3B Chelsea Bemis (.368 AVG/9 HR/42 RBI). Bemis, the 2010 Big East Player of the Year, has had her power numbers dip just a bit from last year, but she is an OPS machine and her match-ups against Nevins will be must watch. Wolny has improved at the plate in all areas after her 2nd Team All-Big East performance, and has been a solid presence behind Bemis in the lineup.

The winner of tonight's game will play the winner between regular season champions Notre Dame and 8th seeded Providence Friars on Friday.

If you want to see the entire tournament bracket, check it out after the jump. 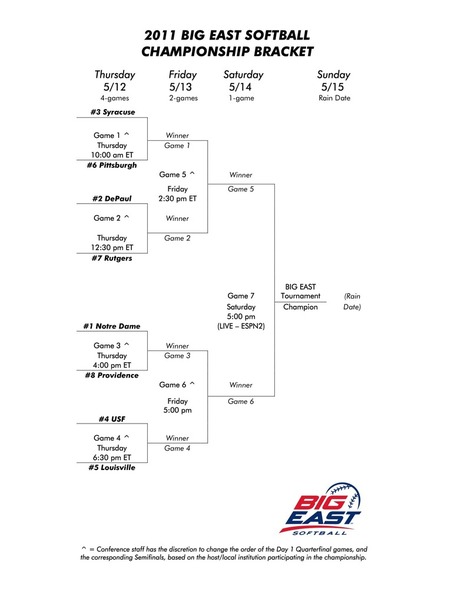