As we're counting down the USF roster from 99 to 1, some days we won't be able to look back at players who used to wear a certain number because a current player has it. So when I find something from the past that I think is overlooked, I'll do a Stampede Bonus like this one.

Cedric Bell was the first player to wear #75 in USF history. According to the 1997 USF media guide, Bell was a first-team all-Class 6A selection from Bradenton's Manatee High School, playing both offensive and defensive line. He also won the 1995 Class 6A weightlifting title, which I wasn't aware existed. He was part of Jim Leavitt's first recruiting class in 1996, and although he only played one official season for the Bulls, he does hold half of the answer to an unusual trivia question: Who were the first players out of the tunnel during the introduction of the team at the inaugural game? 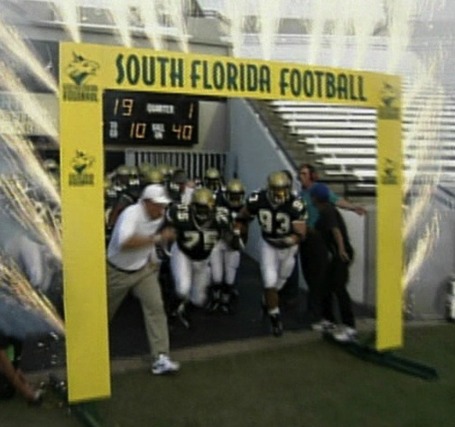 Bell and defensive lineman Derek Busciglio (#93) came out first. I don't know how they came to be the two players who led the team out on the field. If anyone's reading this and has more information, we'd love to hear the story.

But Bell wasn't the only #75 in that first season. 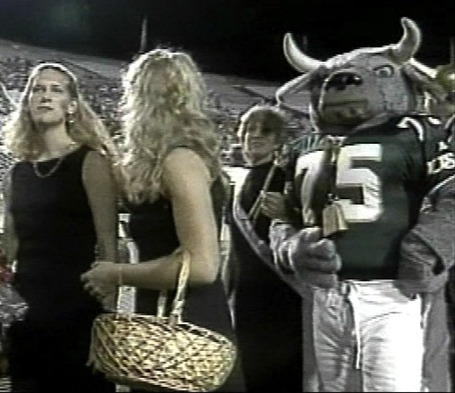 Rocky also wore #75 in 1997, and I think he kept wearing it to football games for the entire time before he was redesigned and reappeared in 2003. You could guess that Cedric Bell and Derek Busciglio earned the chance to lead the team out of the tunnel against Kentucky Wesleyan on merit, or by a drawing, or something. But I'm even more interested to know how the spirit squads chose #75 for Rocky to wear.