Share All sharing options for: Stampeding Through The Roster: #88 TE Andreas Shields

We are now only 88 days away from Notre Dame, and so we meet player #88 on the USF football roster:

Stats in 2010: Had five receptions for 74 yards, including a 31-yarder against Rutgers that started the game-winning drive (the drive that ended with the Jacob Sims FAT GUY TOUCHDOWN). Had three catches against Florida, when the wide receiver position became so dire that Shields was split out wide for much of the game.

Also had four kickoff returns for 73 yards. Nearly won the Louisville game with a 41-yard kick return, but Maikon Bonani missed a long field goal (after he made one that was canceled by a Charlie Strong timeout). USF won in overtime anyway, but we lost what would have been a great piece of USF football lore. Imagine winning a game on a last-second kickoff return by a tight end.

How did he come to USF: From Wharton High School, where he was the answer to Bill Gramatica, dislocating a kneecap during a jumping high-five. But I say Kerwin Bell has them both beat.

Recruiting Rankings: Shields' recruiting ratings illustrate the circular logic of the recruiting world. When USF offered Shields, he was an undersized, lanky high school basketball player with no varsity football experience, and coming off the aforementioned kneecap injury. Even his coach was surprised. But when you get a scholarship offer, the recruiting experts will suddenly discover you, and assign you a talent level appropriate to the team that signed you. For example, Scout took the time to give him two stars and declare him the #63 tight end in all the land. If Florida had offered him under these circumstances, he would have been three stars and #41. Florida Atlantic, one star. You get the picture.

Projected Playing Time for 2011: Shields will continue to get most of the time at tight end, where Coach Holtz will use his combination of size and speed to create mismatches.

Also worth mentioning here is Shields' role on the kickoff team. In USF's kick return formation, he is one of a pair of players who line up about 15 yards in front of returner Lindsey Lamar: 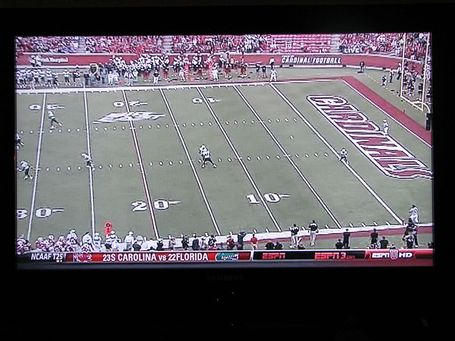 From this position, #88 throws a lot of key blocks for Lamar, as you can see in this USF 2010 special teams highlight video. He's also capable of returning kicks from this position, so opponents can't avoid a big return by kicking it short. Some may question the wisdom of having an important offensive starter crashing about on special teams. But kick returning was a team strength last year, and Shields was a big part of that, so why mess with a good thing?