Are These USF's 2011 Football Uniforms?

Share All sharing options for: Are These USF's 2011 Football Uniforms?

Believe it or not, EA's NCAA Football 12 is only ten days away from hitting store shelves. To give everyone time to get their custom teams set up and on the field as soon as the game goes on sale, EA has already opened up this year's TeamBuilder site. You can use your favorite team's logo, stadium, uniforms, and rosters to build your custom team, so it's like getting a sneak preview of how your team will look in the game.

I'll post a customized USF team with everyone's names filled in between now and July 12. For now, though, let's take a look at what might be this year's football uniforms.

As Ken noticed last week, there have been a couple of tweaks to the jerseys and pants, which we'll cover a little later. But first, there appears to be one brand-new uniform component: gold pants. 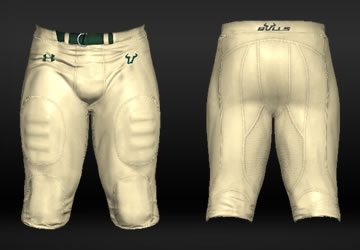 USF has never had gold pants before, and if these are for real, I have to think we'll see them sometime this season. Probably not with the gold helmets, though, since they're two different shades of gold.

Speaking of which, the helmets are the same as last year. By the way, the decal on the white helmet is larger than it appears in the game. They haven't made any adjustments since the white helmet first showed up in NCAA Football 10. And if you weren't sure whether the decals on the gold helmets had changed from black to green when you saw them against Syracuse last season... they have. The facemask is still black.

The rest of the new uniforms and comparisons to last year's look after the jump. 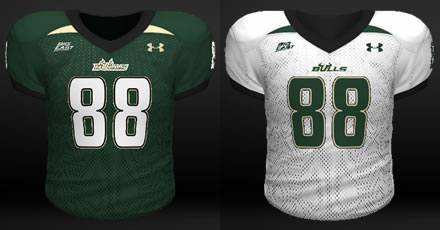 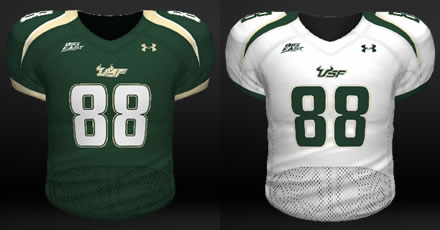 The obvious change is the horns around the neck. The design wraps tightly around the back colllar, and if you were to look straight down on a player wearing them, they would look a lot like the "U" logo.

Other changes: the collars are now the same color as the jerseys (they were black on last year's jerseys), the wordmark has changed from "Bulls" to "USF", the numbers are slightly smaller, and the green/black outline on the road numbers are gone (the gold outline is still there). Also, the material looks less meshy than it did last year

The pants haven't changed all that much. You may have to click on the pictures and enlarge them to see the differences.

The one change you should be able to see is the "Bulls" wordmark on the back of the belt loop. I'm not a fan - it's one step away from the cheerleader shorts where they write stuff across the back. The other changes are more subtle - the "U" logo on the front of the pants has less outline than before, and the belts are a slightly different shade of green.

All in all, these aren't bad. The horns will take some getting used to, but I expect I'll warm up to them eventually. What do you all think?