We saw some hints of USF's new football uniforms when NCAA Football 12 came out, and at today's FanFest at Raymond James Stadium the whole set was rolled out to the press and the public. Let's start with the basic elements. (This picture and the next one are from Greg Auman's Twitter feed.) 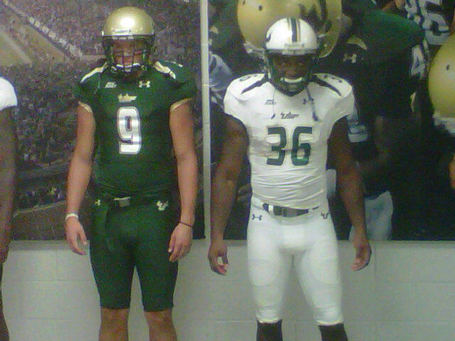 For the most part, these are right on line with what we saw out of the video game, but it looks like some extra stripes have been added to the white helmets, and there's some white trim to the horns that wrap around the front of the green uniform. And at long last, after many years of having a weird greenish tint to the gold helmets, the gold helmets now match the gold in the rest of the color scheme.

And then there's these... green freaking helmets. 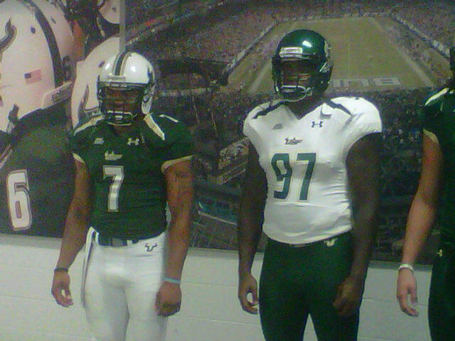 Personally, I'm vehemently opposed to the green helmets, and the rest of the changes aren't doing much for me either. I'll complain after the jump.

Man, where do I begin with these?

-- Look how tight the jerseys are, especially Ryne Giddins's jersey. I understand they're tight like this so they don't snag, and an offensive lineman can't commit holding if there's nothing to hold. But it's so tight it compresses the number on the front (more on the numbers later). Anyone who isn't cut like a Greek god is going to look bad in the white uniforms. The offensive linemen and the defensive tackles are going to look like slobs.

-- The gold stripes on the white helmet and the gold trim around the "U" logo are completely unnecessary. The original white helmet is my favorite uniform piece in USF's entire football history. I don't see why it had to be changed. Change for change's sake, I guess.

-- The numbers don't pop anymore, especially on the white jerseys. They're too skinny, and putting space between the outline of the digits and the digits makes them look much more dull.

-- I wonder what the names on the back of the jerseys will look like.

-- The shoes are OK, I guess. (This picture is from USF Football's Twitter feed.) 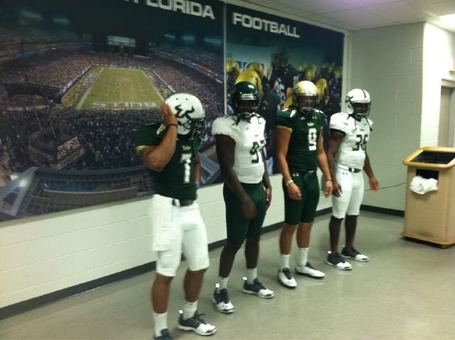 All in all, I think USF and Under Armour made a bunch of changes because they could. On the plus side, at least there aren't any awful blackout uniforms or camoflauge jerseys in the bunch (that we know of). But there wasn't anything wrong with what they were wearing before. Just using the white helmets more often made a huge difference, without adding anything new. The white helmet/green jersey/white pants combination is the best one the Bulls have ever rolled out. It didn't need to be messed with.

But of course, new uniforms mean people buy new replicas, which brings in money, which USF really needs. So I guess I won't harp on these too much more. Except for the green helmets, because those are atrocious.