Some Days, You're Just Outmatched

Share All sharing options for: Some Days, You're Just Outmatched

Okay, it wasn't that bad. But after a few minutes of play, it was obvious which team was dictating the terms of the game. And that was Marquette.

In the pregame article, Ken said USF needed to "find a quality shot within the system." Marquette played an excellent defensive game designed to prevent exactly that.

USF matched Marquette's defensive intensity for a while -- at one point both teams were 6 of 18 shooting -- but late in the first half, Marquette's offensive opportunities starting getting easier while USF's did not.

Here's a detailed look at one USF possession, and how Marquette's smothering defense prevented USF from getting said quality shot.

After a Marquette miss, they hustle back on defense, forcing Anthony Collins to slow it down and wait and set up USF's half-court offense. Marquette isn't quite in the 2-3 zone they played all night, but you can see it starting to form up in the below picture: 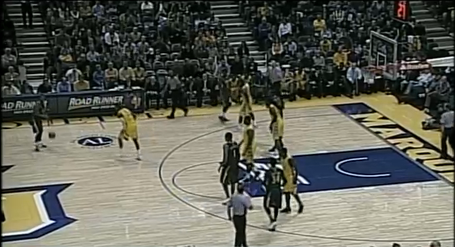 Collins dribbles right as Ron Anderson Jr. sets a lazy screen. The Marquette defender beats the screen to the high side, rendering it ineffective: 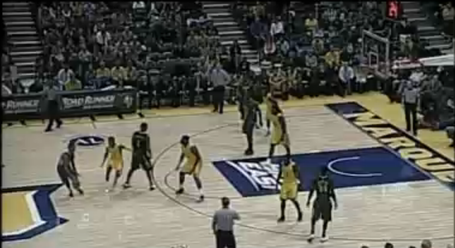 With nobody open to pass to and no space to dribble into, Collins throws it back left to Jawanza Poland: 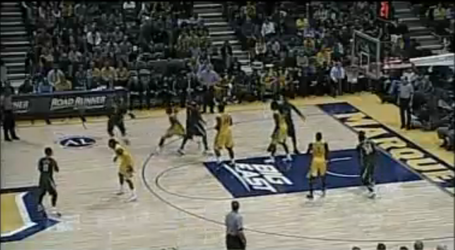 After the jump, the rest of the play, and how this sequence epitomized USF's night.

Poland then passes to Toarlyn Fitzpatrick cutting out of the paint. But even as Fitzpatrick catches the pass, he's blanketed by Davante Gardner. 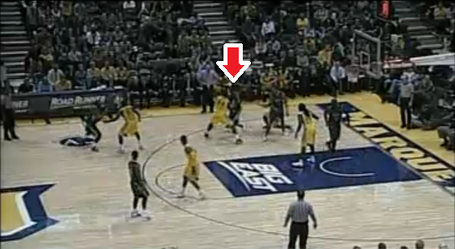 Fitzpatrick tries to loop around Gardner and find some space to dribble-drive. But there's nowhere for him to go, so he bounce-passes into Anderson posting up: 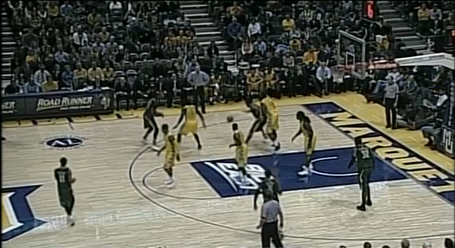 Note the placement of the Marquette 2-3 zone defense in the above shot. They're all on the strong side of the court, leaving the weak side wide open. And look where their heads are: they're all watching the ball and an opponent... except nobody's watching Hugh Robertson, who is lurking at bottom right.

Anderson leans back into the defender like he's going to post up for a shot, but instead throws a neat little pass to Robertson as he cuts into the weak side low post: 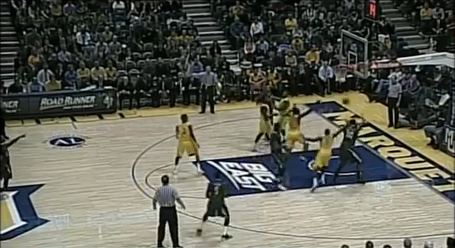 But Marquette's defense quickly reacts, and surrounds him there. Robertson pump-fakes twice, but finds himself trapped under the basket: 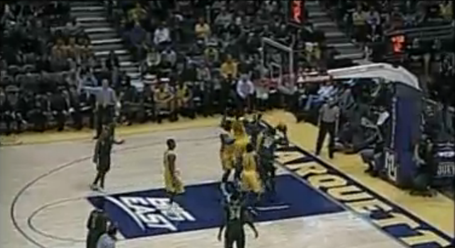 All he can do is throw the ball out of the paint all the way back to point guard Anthony Collins, who collects the ball near the scorer's bench: 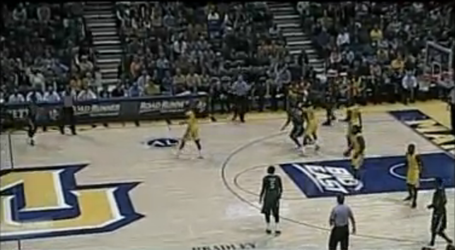 USF must now reset its half court offense with only nine seconds left on the shot clock. Collins tries to dribble right again, and again an ineffective screen from Anderson fails to help: 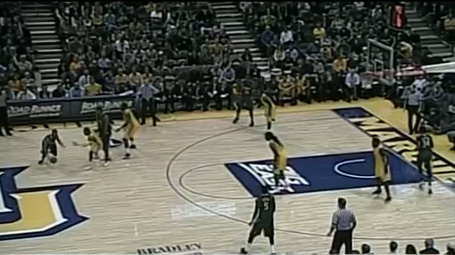 Forced to create a shot on his own, Collins does a cross-over dribble and tries to drive the lane: 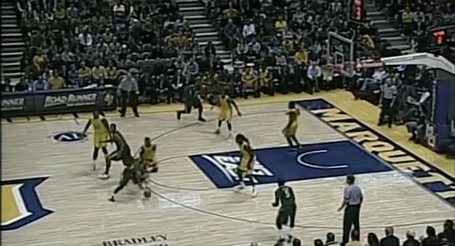 Even though Poland is open to Collins' right, with only four seconds to shoot he tries to take it all the way himself, and runs right over Jae Crowder, who had been in that spot for a good four seconds. (Check the last three photos.) Charging. Turnover. Marquette ball. 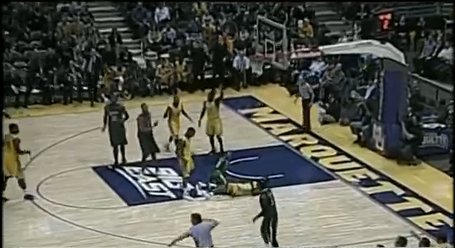 There's nothing tactically brilliant about this sequence. Marquette plays a basic 2-3 zone, but they play it very effectively. At any point during the above sequence, a momentary lack of focus or hustle could have created an opportunity for USF to take a good shot, or pass into a good shot. Marquette never let that happen. Every little reaction, from hustling around the screen, to swarming Robertson in the low post (probably USF's best scoring chance on that trip), to Crowder's absorbing the charge, added up to a possession where USF couldn't even get a shot off.

It was like this all night. USF's half-court offense consisted of fruitlessly passing the ball around, looking for openings that never came, and being forced to take low-percentage shots late in the shot clock.

And in a perverse way, this is why Toarlyn Fitzpatrick had a big scoring night. Several of his baskets, including both three-pointers, came from long range late in the shot clock after USF failed to get the ball to who they wanted to get it to. Augustus Gilchrist had only six shot attempts on the night. Anderson had two, missing both. Fitzpatrick had 15 shot attempts, out of 45 total for the team. In light of USF's height advantage over Marquette, and all the attempts the Bulls made to work the ball inside, I doubt that's the distribution Stan Heath wanted.